Echenique replies to the criticism of Margarita Robles: "I don't see why contributing to the solution of a problem can be reprehensible". 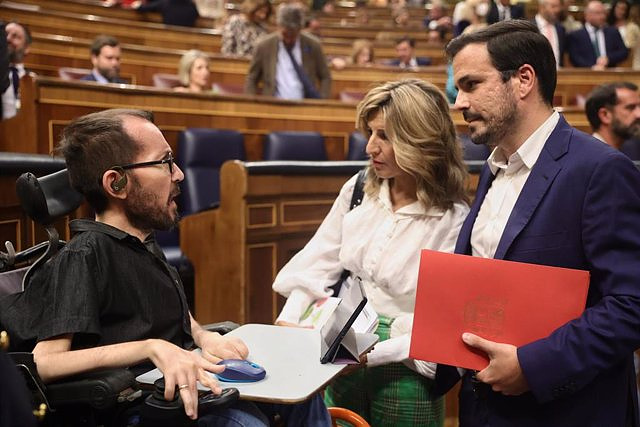 Echenique replies to the criticism of Margarita Robles: "I don't see why contributing to the solution of a problem can be reprehensible"

The spokesman for United We Can in Congress, Pablo Echenique, has defended waiting for the result of the negotiation of Vice President Yolanda Díaz with large distribution before trying to promote a tax on the extraordinary profits of distribution companies.

At a press conference in the Lower House, Echenique defended the tax proposed by United We Can as "complementary", but opted to "wait and see if the agreement that Yolanda (Díaz) is promoting is successful." "And I hope so, because people are having a bad time," she added.

Yolanda Díaz's proposal involves seeking an agreement with the large distribution companies to limit the prices of basic food products, starting a round of meetings this Thursday with Carrefour Spain, together with the Minister of Consumption, Alberto Garzón.

The spokesman for United We Can wanted to underline "all his support" for the proposal of the Vice President of Labor and Social Economy to seek an agreement with the large supermarkets, considering that "any initiative that seeks to reduce prices or prevent them from increasing so much is welcome ":"All the support so that this negotiation goes well", he said.

Asked about the reproaches to this negotiation by the Defense Minister, Margarita Robles, Echenique has argued that "at a time when families are having such a bad time, any initiative they can contribute has to be welcomed".

"I don't know how anyone can oppose a vice president and the Minister of Consumer Affairs trying to reach a solution that allows families to pay less. I don't see why contributing to the solution of that problem can be reprehensible," he lamented.

All of this after Robles accused Díaz of not respecting the powers of the Minister of Agriculture, Fisheries and Food, Luis Planas, and questioned his ability -- behind the proposals, he said, there are "technical and economic aspects that you have to know"-- and of accusing him of trying to "patrimonialize that he is with the most vulnerable".

‹ ›
Keywords:
PodemosPablo EcheniqueCongreso De Los DiputadosSector AlimentacionEPAgroYolanda Díaz
Your comment has been forwarded to the administrator for approval.×
Warning! Will constitute a criminal offense, illegal, threatening, offensive, insulting and swearing, derogatory, defamatory, vulgar, pornographic, indecent, personality rights, damaging or similar nature in the nature of all kinds of financial content, legal, criminal and administrative responsibility for the content of the sender member / members are belong.
Related News