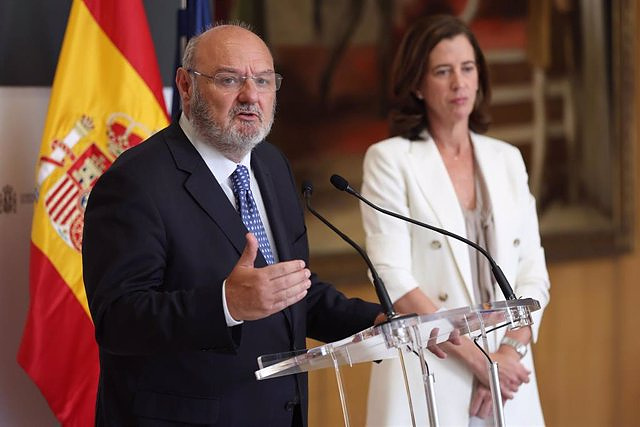 CC.OO., UGT and FINE have announced that they will intensify the conflict in the banking sector after the breakdown of the "climate of understanding" with CECA at the meeting of the sectoral observatory held this Thursday, in which the workers' representatives have demanded the reopening of agreements to review wages in the sector.

As reported by the unions in a joint statement, from CECA they have argued that the rate hike has not yet impacted the income statements and they have referred to the new temporary tax that banks will have to pay from 2023.

The workers' representatives have spent months demanding that the financial sector associations open a negotiation to review the collective agreement based on the provisions of article 86.1 of the Workers' Statute.

As they defend, the current scenario differs from the one that existed at the time of the negotiation of the current agreements (negative interest rates, economic prospects of no recovery for another ten years and a global pandemic). In addition, bank profits have risen, while the working conditions of the workforce and their purchasing power have deteriorated.

This Thursday a meeting was held between CECA and the unions, in which they hoped that the employers would respond to the measures proposed by the union organizations in the last meeting, which took place in June.

Among other aspects, the three unions proposed a salary negotiation scheme, consisting of the recovery of the variable part of the bonus of the 2021 and 2022 agreement, the salary recovery of 2021 through a formula to be negotiated (as a single payment) and the recovery 2022 salary (with review of salary tables from January 2022 and the inclusion of a review clause at the end of the year).

The negotiating scheme that they proposed also contemplates the review clause for 2023 with the formula that is decided and the review of diets, mileage and telecommuting. They also asked for fixed-rate employee loans to be offered.

The employers requested a period to analyze the proposed ideas, so the unions expected that CECA would pronounce this Thursday, something that, however, has not happened.

"They have not responded to any of our proposals, they say they have to continue analyzing (it is incredible that financial institutions need more than 3 months to analyze the data to which we all have access on a daily basis)," the three unions have reproached in a statement. set.

In this context, the representatives of the workers have announced that they will intensify the conflict in the sector, as they already announced before the summer. "They have led us into conflict. If they do not want to listen to reasons at the table, they will have to continue listening to our arguments and demands outside of it," they have warned. The next meeting of the sectoral observatory will take place on October 4.

‹ ›
Keywords:
UGTSector FinancieroSindicatos
Your comment has been forwarded to the administrator for approval.×
Warning! Will constitute a criminal offense, illegal, threatening, offensive, insulting and swearing, derogatory, defamatory, vulgar, pornographic, indecent, personality rights, damaging or similar nature in the nature of all kinds of financial content, legal, criminal and administrative responsibility for the content of the sender member / members are belong.
Related News