Unemployment in the eurozone stands at a record low of 6.6% in July, one tenth less 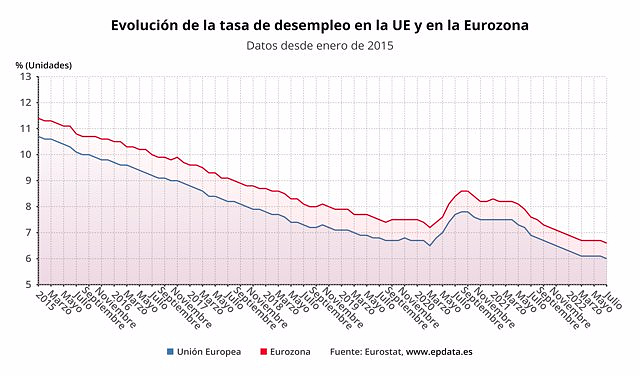 Unemployment in the eurozone fell by one tenth in the month of July, to stand at 6.6%, which represents the lowest level of unemployment among the Nineteen of the entire historical series, which dates back to April 1998, according to Eurostat data.

The statistical office has adjusted the data for the previous three months one tenth upwards, to stand at 6.7%, so according to the new updated data, this is the first time that this new historical minimum has been reached .

The unemployment rate in the eurozone thus remains eight tenths below the level prior to the pandemic, since in February 2020 unemployment among the euro countries was 7.4%.

Likewise, in the European Union as a whole, the unemployment rate fell one tenth in July, to 6%, compared to 6.9% a year earlier. It is also the lowest level of unemployment among the Twenty-seven.

The European Statistical Office estimates that 12.959 million people were unemployed in the EU in July 2022, of which 10.983 million were in the euro zone. This represents a monthly decrease of 113,000 and 77,000 people, respectively.

In the case of those under 25 years of age, the unemployment rate in the euro zone fell by two tenths, to 14.2%, while in the EU as a whole the figure was 14%, also two tenths less.

In absolute terms, the number of unemployed young people in the EU reached 2.630 million people in the seventh month of the year, of which 2.173 million corresponded to the eurozone.

Thus, the youth unemployment rate in Spain was 26.9%, the second highest among the Twenty-seven, behind the 28.6% in Greece and ahead of the 24.5% in Estonia.