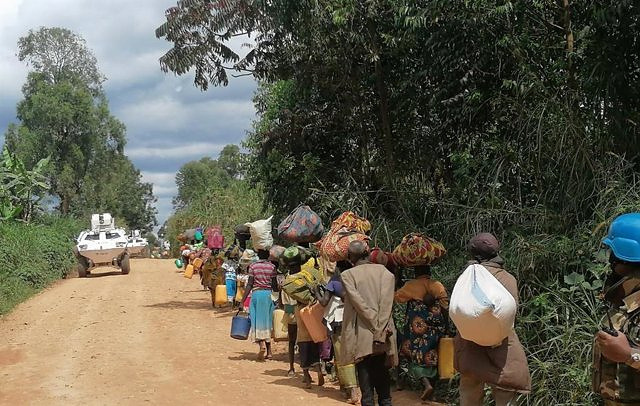 The United Nations has urged this Saturday the armed groups operating in the Democratic Republic of the Congo (DRC) to "immediately cease all forms of violence", within the framework of an increase in attacks against civilians by these militias.

"We are concerned about the deterioration of the security situation in eastern DRC," explained the spokesman for the Secretary General of the United Nations, Stéphane Dujarric, after lamenting the increase in attacks against civilians by armed groups.

The international organization has asked the Congolese armed groups to "unconditionally participate in the Program for Disarmament, Demobilization, Community Recovery and Stability (P-DDRCS)", approved on March 17 by the Congolese Government with the aim to achieve the stabilization of security in the eastern part of the country.

Dujarric has pointed to the rebel group March 23 Movement (M23) --accused since November 2021 of carrying out attacks against Army positions-- and the armed group Cooperative for the Development of Congo (CODECO), which committed itself on 7 from June to a unilateral ceasefire.

Likewise, the UN has urged the foreign armed groups present in the country to "lay down their arms and return to their countries of origin." "We reaffirm our strong commitment to the sovereignty, independence, unity and territorial integrity of the DRC," Dujarric said.

The spokesman referred in this regard to the participation in the agreement of the Allied Democratic Forces (ADF), the group Resistance for the Rule of Law in Burundi (RED-Tabara) and the Democratic Forces for the Liberation of Rwanda (FDLR).

"We welcome and support the ongoing national and regional political efforts to accompany disarmament," Dujarric celebrated. In turn, he has highlighted the work of the UN Mission in the Democratic Republic of the Congo (MONUSCO). "(The program) is impartially and forcefully protecting civilians and helping to neutralize armed groups," he said.

‹ ›
Keywords:
OnuRepública Democrática Del Congo
Your comment has been forwarded to the administrator for approval.×
Warning! Will constitute a criminal offense, illegal, threatening, offensive, insulting and swearing, derogatory, defamatory, vulgar, pornographic, indecent, personality rights, damaging or similar nature in the nature of all kinds of financial content, legal, criminal and administrative responsibility for the content of the sender member / members are belong.
Related News