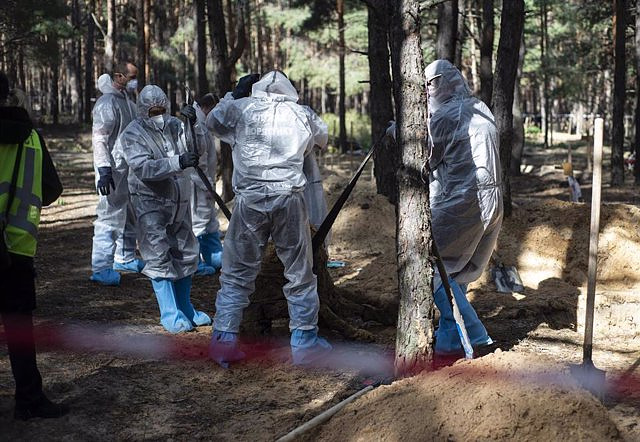 The Ukrainian authorities have estimated this Wednesday at more than 260 the total number of bodies exhumed in a mass grave found in the city of Izium, located in the Kharkov region (east), after the recent withdrawal of Russian troops in the face of the counteroffensive launched by the Ukrainian Army.

The Kharkov Police have indicated in a message on their Telegram account that until Tuesday the bodies of 263 people, including two children, had been removed, before adding that they show "traces of torture, hands tied, bullet holes, fractures and explosive injuries.

Thus, he has reiterated that some 450 bodies have been located in the area and has stated that "investigators have opened criminal proceedings." "A large number of citizens who lived under occupation witnessed war crimes and are already giving testimony to investigators about the positions of Russian troops, their headquarters, their offices and the places where Ukrainians were held and tortured."

"One of the torture rooms found in Izium was in the district Police department," he detailed, while noting that "in every corner of the unoccupied Kharkov region, the authorities participate in the search and documentation of crimes by Russia".