Truss is against a windfall profits tax on energy companies. 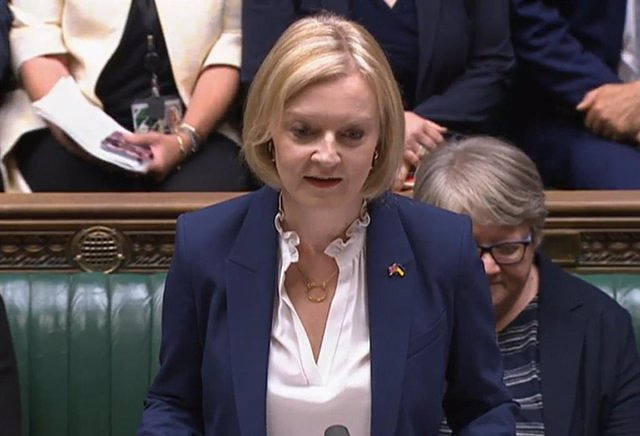 Truss is against a windfall profits tax on energy companies

The new Prime Minister of the United Kingdom, Liz Truss, has attended the British Parliament for the first time as a 'premier' on Wednesday, where she has defended her star measure, the reduction of taxes, in the face of criticism from the opposition British Labor Party, Keir Starmer.

The Labor leader has criticized the new prime minister, whom he has pointed out for trying to want to launch a 'Truss tax' that will benefit the banks. Along the same lines, parliamentarian Ian Blackford has stated that this measure will be paid for by families "for years to come".

"There is nothing new in the trickle-down economy Tory fantasy," Starmer said in Parliament, adding that families and public services need every penny they can get, so the time is not right for tax relief. of the companies, according to the BBC network.

The British prime minister has also come out against imposing a windfall profits tax on energy companies to help tackle rising energy prices across Europe.

On the other hand, given the recent dismissal of Shailesh Vara as minister for Northern Ireland, Truss has defended that he wants a "negotiated solution" to the Brexit agreements that affect Northern Ireland and that, for the moment, London is resisting Apply.

For this reason, he has insisted that he wants to work with all the parties in Northern Ireland. "I am determined to work with all parties to find that resolution," she explained, according to the newspaper 'The Guardian'.

During this first session of Truss in office, the British parliamentarians have been able to ask direct questions to the new 'premier', who accepted her position on Tuesday, thus ending the renewal process within the Conservative Party that began on July 7 with the announcement of the resignation by former Prime Minister Boris Johnson.

Truss announced on Tuesday a government marked by the practically general remodeling of the front line, despite the fact that no major political changes are expected in relation to the Johnson era. For this reason, the Prime Minister has decided to keep Ben Wallace as Defense Minister, a key figure in London's strategy in the framework of the Russian invasion of Ukraine.