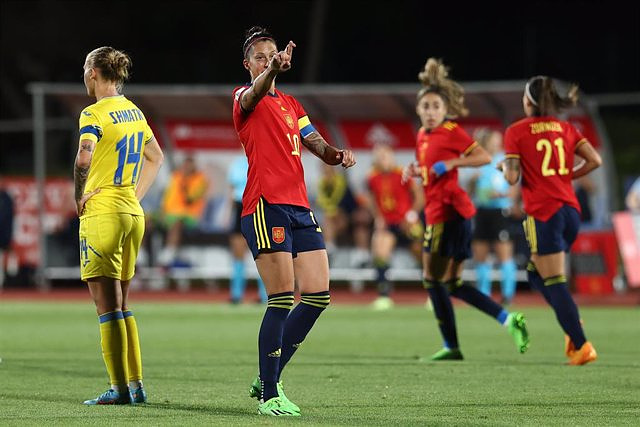 The Spanish women's soccer team met the forecasts and closed its qualifying phase for next year's World Cup in a perfect way and without conceding a goal after beating Ukraine 5-0 on Tuesday at the Ciudad del Fútbol in Las Rozas ( Madrid).

The national coach Jorge Vilda had tried to motivate his footballers with the challenge of exceeding 50 goals and not conceding any in this classification and the internationals responded with an optimal match, with more efficiency than last Friday's against Hungary despite the fact that the rival It was perhaps of better quality, although it lacked more success in the second half.

The coach did make more rotations to face this second duel and only kept six (Ivana Andrés, Olga Carmona, Patri Guijarro, Claudia Zornoza and Athenea del Castillo) from the victory against the Magyars, and put Lola Gallardo in goal from the start, Jenni Hermoso, Andrea Pereira, Oihane Hernández and Alba Redondo who formed a good offensive duo with Esther González.

Spain, as expected, found the team led by Lluís Cortés located more in the lower block, although, unlike Hungary, they knew how to deploy with a little more intentions and were even able to test Lola Gallardo's gloves with danger.

The Spanish only took a quarter of an hour to get ahead on the scoreboard, thanks to Esther González, who did not miss an assist from Jenni Hermoso. The national team kept up their pressure not to let their rival maneuver and this time, unlike last Friday, they found the goal more easily. Alba Redondo was in charge of signing a brace and another goal by Esther González before the break put the victory on track.

However, the spectators who attended the Ciudad del Fútbol de Las Rozas were not able to enjoy so many goals in the second half, despite the fact that the team did not stop trying and did not slow down, but the only prize was the goal in the 67th minute by Jenni Hermoso, who converted a penalty committed on Olga Carmona.

From then on, Spain was losing some energy with the passing of the minutes and the carousel of changes, but they did not allow Ukraine to go too far out of their field. Amaiur Sarriegi could have scored the sixth in the final minutes, but his shot hit the crossbar and the counter at this stage remained at 53 goals.