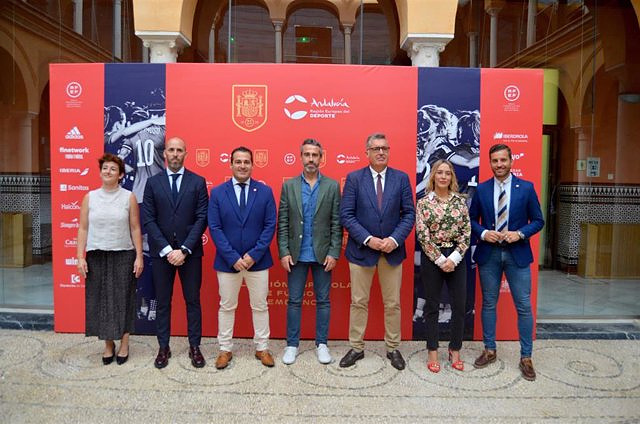 The Spanish women's soccer team will begin preparation for the 2023 World Cup in Australia and New Zealand with a friendly match on October 7 against Sweden (8:30 p.m.) in "the kingdom of Cordoba soccer".

In a ceremony held in Córdoba attended by the national coach, Jorge Vilda; the director of women's football of the RFEF, Ana Álvarez; and the vice president of the RFEF and president of Andaluza, Pablo Lozano, has presented a meeting that will try to bring together the majority of fans, with tickets at popular prices of 8, 10 and 12 euros to fill El Arcángel.

Pablo Lozano, who referred to the stadium as "the kingdom of Cordovan football", thanked the institutions for their predisposition to "decidedly commit to women's football for major events in Andalusia".

"We want the people of Cordoba to go see the women's team as a family and support our national team," Lozano said. The RFEF vice president also praised Jorge Vilda's work, which benefits both the senior team and the lower categories. "Thanks to the work you are doing, a great base of women's football is being created in Spain," he said.

The territorial delegate of the Regional Ministry of Tourism, Culture and Sports of the Junta de Andalucía in Córdoba, Eduardo Lucena, also participated in the presentation, recalling that the celebration of this match is within the forecast of hosting 24 national team matches in Andalusia until 2025.

"The Board continues and will continue betting that Andalusia is a sporting benchmark and matches and events like this one that we are now presenting demonstrate this," Lucena stressed.

The Córdoba Provincial Council was also represented by its Sports delegate, Ana Blanco, who stated that the Spanish team "is a benchmark that has broken many barriers in the fight against inequality" and that, with this type of appointment, , "Córdoba is once again consolidated as a province prepared for major sporting events."

‹ ›
Keywords:
Nueva ZelandaMujer Y Deporte
Your comment has been forwarded to the administrator for approval.×
Warning! Will constitute a criminal offense, illegal, threatening, offensive, insulting and swearing, derogatory, defamatory, vulgar, pornographic, indecent, personality rights, damaging or similar nature in the nature of all kinds of financial content, legal, criminal and administrative responsibility for the content of the sender member / members are belong.
Related News