Volkswagen has delayed until next year the planning round in which the productions of the plants in the coming years will be designated. 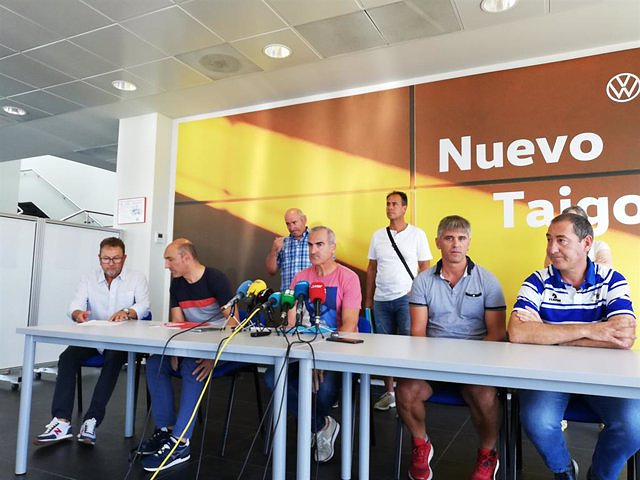 The works council of the Volkswagen Navarra factory, in Landaben, has opted to "advance along the path it has begun" with the aim of guaranteeing the necessary production volumes from 2026 to "guarantee the future" of the plant and the fabric industry of the Foral Community.

In this sense, he has called on the company's management and its president, Michael Hobusch, to jointly defend "the interests of the plant and its staff in the face of the challenges that are presented to us".

In the same way, it has asked the governments of Navarra and Spain, "as participants who are going to be in decision-making", to provide "differentiating elements that can help Volkswagen Navarra and its suppliers continue to be a cornerstone on the one that pivots our community".

This is how the president of the works council, Alfredo Morales, has pronounced himself, who has read a statement at a press conference, unanimously agreed by the representation of the workforce, to assess the meeting held this Thursday with members of the Volkswagen group, of the European and world works council and trade union representatives from European factories. An appointment that was attended by Gunnar Kilian, head of Human Resources for the Volkswagen group, and the president of the world committee, Daniella Cavallo.

In this meeting, Morales explained, "the current difficult situation" derived from high inflation, the invasion of Ukraine, the rise in energy and raw material prices and the microchip crisis were analyzed. Issues, he explained, that "make it necessary to move the planning round (PR 72) to next year in which the allocation of production volumes for the plants in the coming years will be defined."

In this sense, regarding the strategy of the Iberian Peninsula and regarding the Landaben plant, "the lack of production volume from 2026 with which to maintain the current situation of the factory was evident". For this reason, the committee asked the Volkswagen group "not to have guardianships and to be a co-star in the development of that future structure of the Iberian Peninsula".

Alfredo Morales has remarked that, from 2026, Volkswagen Navarra "has a risk" but also "an opportunity". "The group has been able to see first-hand what our strengths are", he stressed, asking for "the space to be able to have our own identity and make decisions". "We have risks but also an opportunity that we are not going to miss and we are going to work together so that we can solve that deficit that we have", he stressed.

‹ ›
Keywords:
Volkswagen
Your comment has been forwarded to the administrator for approval.×
Warning! Will constitute a criminal offense, illegal, threatening, offensive, insulting and swearing, derogatory, defamatory, vulgar, pornographic, indecent, personality rights, damaging or similar nature in the nature of all kinds of financial content, legal, criminal and administrative responsibility for the content of the sender member / members are belong.
Related News