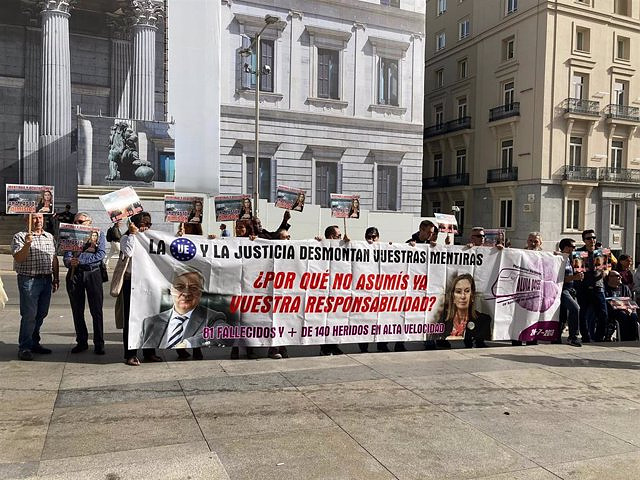 The Platform of Victims of the Alvia railway accident has concentrated this Monday in front of the Congress of Deputies to once again demand a technical and independent investigation, coinciding with the week in which the trial will start for this fact that nine years ago and more than two months caused 80 deaths and 145 injuries in the Compostela neighborhood of Angrois.

This has been claimed by Jesús Domínguez, the president and spokesperson of this Victims Platform, who has assured that the start of the trial causes him a "bittersweet feeling" because the delay has caused many victims to no longer be present.

"This delay is not accidental, the institutions have been the cause," defended the platform's spokesman, who has directly accused the former Minister of Public Works Ana Pastor of being one of the "causes" of the delay in the start of the trial.

In this context, they have demanded technical and independent investigation, something that, in their opinion, Ana Pastor wants to avoid, denouncing that the judicial experts were appointed by the Xunta and "also plagiarized the Government report." "There will be a sentence, but there will be no justice," she has proclaimed.

They have also read a press release, with requests for the resignation of Ana Pastor, and demanding that she "assume her responsibility" accusing her of sending a letter to Brussels asking not to publish the report against the Spanish investigation.

‹ ›
Keywords:
AngroisCongreso De Los Diputados
Your comment has been forwarded to the administrator for approval.×
Warning! Will constitute a criminal offense, illegal, threatening, offensive, insulting and swearing, derogatory, defamatory, vulgar, pornographic, indecent, personality rights, damaging or similar nature in the nature of all kinds of financial content, legal, criminal and administrative responsibility for the content of the sender member / members are belong.
Related News