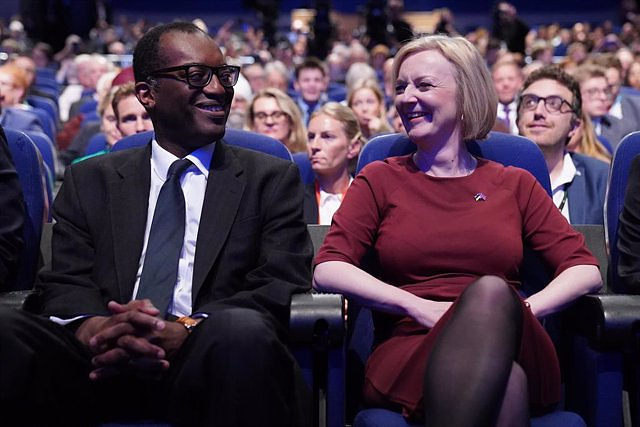 The British Government has rectified part of its tax reduction program and has ruled out eliminating the marginal rate of 45% that was taxed on income above 150,000 pounds (171,596 euros) per year and that affected 1.7% of taxpayers.

In a message posted on his Twitter social network account, British Finance Minister Kwasi Kwarteng has indicated that "the abolition of the 45% rate has become a distraction from our primary mission of tackling the challenges" of the country.

"We understand it and we have listened," added the minister, who has promised to go ahead with most of the tax reduction plan.

The elimination of the 45% marginal rate of income tax, which affects only those Britons who earn more than 150,000 pounds a year, was going to mean a loss of income for the public coffers of 2,065 million pounds (2,362 million euros ) to five years.

According to data from the Office for National Statistics, for the fiscal year 2021-2022, the marginal rate of 45% affects 563,000 Britons, which is equivalent to 1.7% of the nearly 32.7 million taxpayers who has the country.

Among the rest of the measures with which the British Government plans to continue, the reduction of the marginal rate from 20% to 19% is maintained, one percentage point less. In the first year of impact of this measure, tax revenues will fall by 5,270 million pounds (6,028 million euros). However, the British Executive expected that the increase in economic activity and employment would end up assuming a positive impact of 45 million pounds (51.5 million euros) over five years.

The main measures that will have the greatest impact on the British public treasury will be the cancellation of a rise in corporate tax from 19% to 25%, which was to come into force in April 2023 and was to raise up to 18,710 million (21,404 million euros) for 2026-2027. On its side, the reduction of 1.25 points in the country's Social Security contributions will have a negative impact of 15,250 million (17,446 million euros) over five years.

After the announcement of this partial correction, the pound has recovered the ground it had lost in the last week and a half. In its cross against the euro, it has reached 1.1477 euros, from 1.1390 ​​where it closed on Friday and after having reached an intraday low of 1.1324 euros in the first trading hours.

Compared to the dollar, the British currency has been exchanged for 1.1281 'greenbacks', after having observed an intraday low of 1.1086 dollars in the first hour.

However, the impact on secondary debt markets has not been as pronounced. The 10-year British bond yield has reached a minimum of 3.969%, below the 4.200% observed on Friday and far from the maximum of almost 15 years last week, when it reached 4.591% before the Bank of England decided to intervene in the markets.