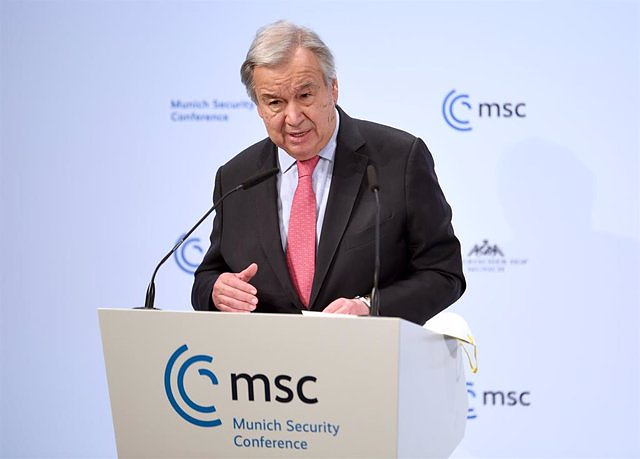 The Secretary General of the United Nations, António Guterres, has applauded the inauguration of the Istanbul coordination center for the export of grain from Ukraine and has asked the parties to work to "effectively apply" the agreement with the aim of "reducing global food insecurity.

"The secretary general warmly applauds the official inauguration of the Joint Coordination Center (JCC) in Istanbul," said Guterres' deputy spokesman, Farhan Haq, who stressed that this body "is made up of representatives of Ukraine, Russia, Turkey and the UN.

Thus, he stressed that "the work of the JCC will allow the safe transport, by merchant ships, of grain, related foods and fertilizers from three key Ukrainian ports on the Black Sea to the rest of the world." "This will help to respond effectively and prevent the increase in global food insecurity," she argued.

"Together with the implementation of the memorandum of understanding between Russia and the UN Secretary General to promote access of Russian food products and fertilizers to global markets, it will help restore confidence in the global food market and reduce prices of food from its current levels", he explained.

Finally, Haq said that Guterres "is grateful to Turkey for giving the parties and the United Nations a platform to help operationalize the Black Sea Grain Initiative", while "thanking Russia and Ukraine for nominating and quickly send their representatives to Istanbul".

Turkey, together with Russia, Ukraine and the UN signed an agreement at the end of last week to reopen three Ukrainian ports that had been blocked for months due to the war started by Russia on February 24.

The agreement went ahead after the parties agreed to a UN-sponsored plan to form a coordination center in the city of Istanbul with the aim of carrying out joint inspections at port entrances and exits and guaranteeing the security of the routes.

In this regard, the ships are expected to cross the Black Sea to the Bosphorus Strait in Turkey, where the joint coordination center is located. Said center will be in charge of examining the ships that enter Ukraine to guarantee that they do not carry weapons or combat material.

‹ ›
Keywords:
TurquíaOnuUcrania
Your comment has been forwarded to the administrator for approval.×
Warning! Will constitute a criminal offense, illegal, threatening, offensive, insulting and swearing, derogatory, defamatory, vulgar, pornographic, indecent, personality rights, damaging or similar nature in the nature of all kinds of financial content, legal, criminal and administrative responsibility for the content of the sender member / members are belong.
Related News