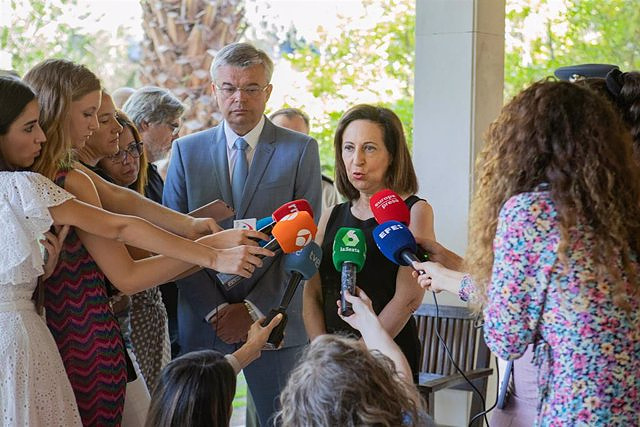 The Ukrainian ambassador to Spain, Serhii Pohoreltsev, has demanded this Wednesday before the Defense Minister, Margarita Robles, more military aid to combat the Russian attack; Although the minister has avoided specifying commitments, she has hidden behind discretion and has only revealed the sending of warm clothing to the Ukrainian combatants to face the coming cold months.

Robles visited the Ukrainian embassy this Wednesday and held a 45-minute meeting with its ambassador during which they had the opportunity to review the aid of military material that Spain has provided to date, as well as the list of requests from Ukraine .

"The situation continues to be very complicated, the enemy continues to attack us and that is why we need more weapons to be able to resist," the ambassador acknowledged in a subsequent joint appearance before the press.

Pohoreltsev has thanked Spain for the collaboration in recent months but has insisted that they need more weapons to be at the offensive level of Russia. "I say that if one wants to help, he always looks for and finds a way to do it," he claimed, confident that some help can arrive "in a short time" while other material is even more complicated.

Robles revealed on Tuesday that the shipment of Army Leopard tanks that were stored in Zaragoza due to their poor condition has been ruled out, although government sources told Europa Press that the option of sending them to Ukraine is still under study. a score of TOA M-113 armored personnel carriers.

The ambassador has avoided making his requests public this Wednesday, but he has explained that Defense already has a list of its priorities. "I hope that our work will give results very soon because unfortunately the enemy is surpassing us in the number of weapons, in the number of troops in the armed forces and to be effective we need more weapons," he asserted.

In this regard, Robles has said that the meeting at the embassy was intended to convey "the solidarity and support" of the Spanish people to Ukraine and details about the weapons are addressed in regular meetings at the Ministry.

"It is a moment of maximum prudence, discretion, the ambassador knows that he has the full support of Spain. Practically once a week they come to Defense and what is within our possibilities we will continue to do," he detailed, revealing only the next shipping of warm clothes for the winter.

In addition, he recalled that 130,000 Ukrainian refugees have already arrived in Spain since the beginning of the invasion and also wounded in combat are being treated at the Zaragoza Military Hospital.

‹ ›
Keywords:
UcraniaFuerzas ArmadasMargarita Robles
Your comment has been forwarded to the administrator for approval.×
Warning! Will constitute a criminal offense, illegal, threatening, offensive, insulting and swearing, derogatory, defamatory, vulgar, pornographic, indecent, personality rights, damaging or similar nature in the nature of all kinds of financial content, legal, criminal and administrative responsibility for the content of the sender member / members are belong.
Related News