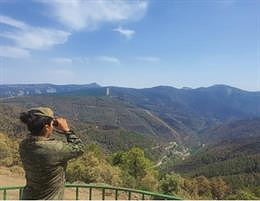 The Army has expanded its operation to fight forest fires in Castilla y León by deploying new observation and surveillance patrols in the Tiétar and Alberche valleys in Ávila and in El Bierzo (León); in addition to the maintenance of the units deployed in various areas of southern Salamanca.

The Army's forest firefighting operation is carried out in support of the civil authorities in surveillance and observation missions, without including in any case the intervention in the extinction or the incursion into the burned area.

It contributes to the surveillance of the assigned area to quickly inform the Community Extinction Authority and in permanent coordination with the Military Emergency Unit (UME).

In addition, various patrols have been deployed for a week in collaboration with the Junta de Extremadura in the Sierra de Gata and Jerte-Vera areas.

In total, the participation of the Army in these firefighting tasks is quantified in more than 100 troops and about 60 vehicles of various characteristics.

‹ ›
Keywords:
IncendioIncendios ForestalesÁvilaFuerzas Armadas
Your comment has been forwarded to the administrator for approval.×
Warning! Will constitute a criminal offense, illegal, threatening, offensive, insulting and swearing, derogatory, defamatory, vulgar, pornographic, indecent, personality rights, damaging or similar nature in the nature of all kinds of financial content, legal, criminal and administrative responsibility for the content of the sender member / members are belong.
Related News