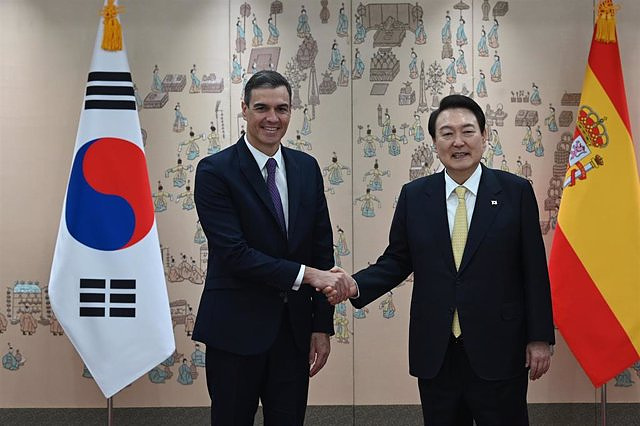 The President of South Korea, Yoon Suk Yeol, has brought together the country's National Security Council to implement "deterrence measures" during the visit of the Prime Minister, Pedro Sánchez, to the Asian country after the launch by South Korea North of a long-range ballistic missile towards the Sea of ​​Japan.

During his speech in a joint statement, the President of the Government indicated that Spain is "sensitive to the challenges to stability in the Indo-Pacific", condemning North Korea's continuous ballistic tests.

He has also called for "the complete denuclearization" of the Korean peninsula and for compliance with UN Security Council Resolutions.

For his part, the South Korean president has given instructions to strengthen the country's defense hours after North Korea launched its second international ballistic missile in just two weeks, all in response to the renewed promise of the United States to use "all means," including nuclear, to defend its allies in Seoul and Tokyo against threats from Pyongyang, Yonhap reported.

In addition, the South Korean president has ordered the imposition of "strong condemnation and sanctions" against his neighbor to the north, including a response from the UN Security Council together with the United States and the international community.

The order from the South Korean president came shortly after meeting with Pedro Sánchez on the first bilateral visit by a Spanish president to the country since the establishment of diplomatic relations between Korea and Spain in 1950.

Hours earlier, Yoon and Sánchez held a nearly two-hour meeting at the South Korean presidential office in which they discussed ways to strengthen bilateral relations between Spain and South Korea.

Both leaders have agreed that the potential for economic cooperation between the two countries "is very great", stressing the importance of cooperation despite the physical distance that separates the two States.

"Spain is an economic power in Europe with an economy similar to ours and superior industrial competitiveness," Yoon reported in a subsequent joint statement with Sánchez.

For his part, the Spanish president has underlined the potential of the two countries to increase bilateral economic relations, especially in the sectors of industrial technology, renewable energy, infrastructure or defense, among others.

‹ ›
Keywords:
JapónPedro SánchezCorea Del NorteCorea Del Sur
Your comment has been forwarded to the administrator for approval.×
Warning! Will constitute a criminal offense, illegal, threatening, offensive, insulting and swearing, derogatory, defamatory, vulgar, pornographic, indecent, personality rights, damaging or similar nature in the nature of all kinds of financial content, legal, criminal and administrative responsibility for the content of the sender member / members are belong.
Related News