Feijóo is no longer the most valued, United We Can remains the third force and Vox marks its worst record. 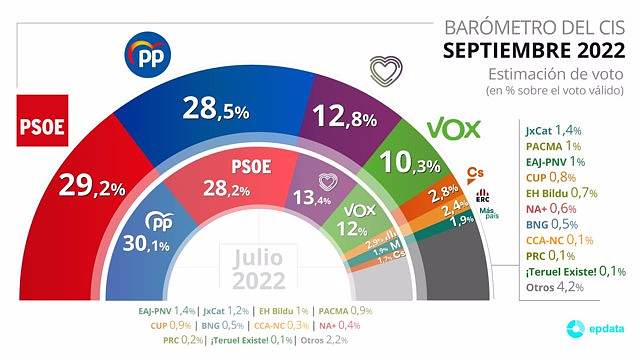 Feijóo is no longer the most valued, United We Can remains the third force and Vox marks its worst record

The barometer of the Center for Sociological Research (CIS) corresponding to the month of September places the PSOE as the party with the highest vote estimate, with 29.2%, snatching from the PP the first place it had won for the first time in the legislature on last July. Specifically, it grants those of Alberto Núñez Feijóo 28.5%. The distance between the two is 7 tenths which, in practice, means a technical draw.

United We Can remain in third position, with 12.8%, although losing strength compared to July; followed by Vox, which falls 1.7 points and stands at 10.3% – its worst record – and Ciudadanos, with 2.8% that would leave them out of Congress.

The barometer published this Thursday was carried out between September 1 and 10, when the new political year began with the energy debate that, on the 6th, was carried out in the Senate by the President of the Government and the leader of the opposition. It is based on 3,837 telephone interviews and has a margin of error of plus/minus 1.6%.

Before the summer parenthesis, the body chaired by José Félix Tezanos placed the PP as the first force for the first time in the legislature. In that study, the CIS calculated a support of 30.1% for the 'popular', compared to the 28.7% it gave to the Socialists. So the distance in favor of the PP was 1.9 points.

After the summer, the estimated vote for the PSOE rose half a point, while losing 1.6 points. The Socialists would be 1.2 points above the 28% support obtained by the last general elections, while the PP would be three tenths below the 28.8% obtained at the polls by Pablo Casado.

The CIS places the PSOE in the first position in estimated votes, once all the responses from the interviewees have been analyzed, but in direct voting it is the PP that is in the lead, with 22%, compared to 20.9% of the socialists. In direct voting, United We Can add 9.3%, Vox 6.6% and Citizens 1.2%, while 7.7% already anticipate that they would not vote if there were generals tomorrow.

In estimation, United We Can maintains the third position that it conquered in July, when it relegated Vox to fourth place. Of course, the left-wing coalition scores 12.8%, leaving 0.6 points down the road, although it recovers the percentage it achieved in the last appointment with the polls.

Those of Santiago Abascal, recorded a drop of 1.7 points, registering their worst mark and remaining almost five points from the 15.09% that allowed them to seat 52 deputies in Congress almost three years ago.

On its side, Ciudadanos grows compared to the previous barometer, going from 1.7% to 2.8%, its best percentage since February, but which would not help it maintain representation in Congress. In November 2019, it achieved 6.79% support and 10 deputies.

Thus, the left-wing bloc would achieve 42% of the votes (which would reach 43.9%, including Más País), while the sum of PP, Vox and Ciudadanos would remain at 41.6%.

Regarding the evaluation of leaders, the leader of the PP loses the first position that he had reached in July, unseating the vice president and strong woman of United We Can in Congress, Yolanda Díaz.

Now Díaz, although he gets a worse grade than in July (4.81), leads the ranking with 4.73, followed by Feijóo, who scores 4.48, compared to 4.89 with which he closed the previous year. The third best valued is the Prime Minister who only improves four hundredths and reaches 4.37. Errejó, meanwhile, starts the course with a 3.87; the leader of Cs, Inés Arrimadas, scores 3.25 and the last one is, again, Abascal, with 2.74.

The third in this case is Díaz, with 9.2% similar to that of the previous barometer.

Regarding the confidence that the President of the Government and the leader of the PP arouse in the electorate, Feijóo, who has been gaining more and more in recent months, is now suffering a setback. If in July 35.6% trusted him a lot or quite a lot, now 28.4% do so, while 67.7% are suspicious. 68.5% now say they distrust Sánchez, almost one point less, while 29.4% trust him, compared to 28.7% in July.

‹ ›
Keywords:
FeijóoPSOEPPEncuestas CIS
Your comment has been forwarded to the administrator for approval.×
Warning! Will constitute a criminal offense, illegal, threatening, offensive, insulting and swearing, derogatory, defamatory, vulgar, pornographic, indecent, personality rights, damaging or similar nature in the nature of all kinds of financial content, legal, criminal and administrative responsibility for the content of the sender member / members are belong.
Related News