The sale of homes registers its best July in 15 years with almost 54,000 operations, 8% more 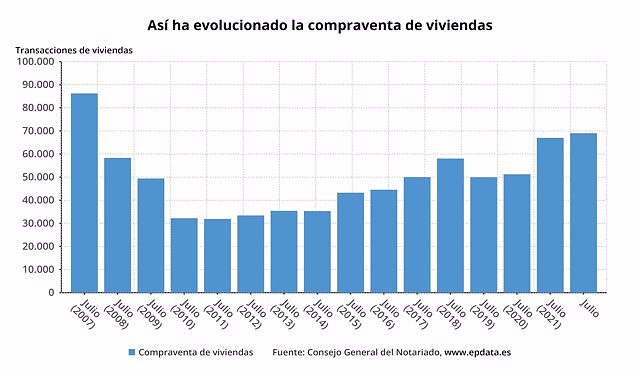 The sale of homes rose 8% last July in relation to the same month of 2021, to add 53,720 operations, its highest figure in a month of July since 2007, when 63,700 sales were exceeded, as reported this Wednesday by the National Statistics Institute (INE).

With the interannual advance in July, the sale of homes has chained 17 consecutive months of positive rates, although July has been the most moderate of the entire period.

In fact, the growth of operations has moderated by almost 11 points compared to the year-on-year rise in June, when home sales increased by 18.8%.

The year-on-year growth of home sales in July was exclusively the result of operations on used homes, which grew by 10.4%, to 44,691 operations, since the sale of new flats fell by 2.5% compared to July last year, adding up to 9,029 transactions. It is its first decline after 20 months of increases.

92.1% of the homes transferred by sale in the seventh month of the year were free homes and 7.9%, protected.

The purchase and sale of free homes rose by 8.3% year-on-year in July, to 49,484 operations, while that of protected homes increased by 5%, adding a total of 4,236 operations.

According to the INE, seven out of ten home sales made in July (69.7%) were made between individuals. In total, 37,471 operations of this type were carried out between natural persons in July, 7.4% more than in the same month of 2021.

In monthly terms (July over June), the sale of homes decreased by 7.4%, its largest drop in a month of July in the last five years.

In the first seven months of the year, the sale of homes has increased by 20.8%, with increases of 23.7% in the case of second-hand homes and 9.1% in new homes.

ANDALUCIA, AT THE HEAD OF SALES

In absolute values, Andalusia was the region that carried out the most home transactions during the seventh month of the year, with 10,932 sales, followed by Catalonia (8,964), the Valencian Community (8,271) and Madrid (6,577).

By contrast, the sale of homes fell in July in three regions: Navarra, where operations fell by 13.4% compared to the same month last year; Madrid (-9%) and La Rioja, with a year-on-year decline of 8.8%.

DOWN 3.8% THE TOTAL OF PROPERTIES TRANSMITTED

The farms transmitted in the property registries, coming from public deeds carried out previously, reached 177,692 last July, 3.8% less than in the same month of 2021.

By sale, 1% more properties were transferred than a year before, while those transferred by donation fell by 20.1% annually; those transmitted by inheritance decreased by 9.3%, and operations by swap fell by 34.3%.