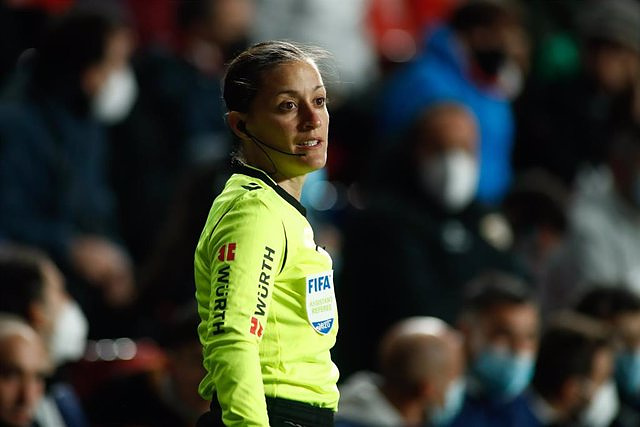 The referees and assistants of the F League, the Women's First Division, confirmed this Friday that they will not go to whistle the matches of the first day of this weekend and the "indefinite break" of their activity.

"This Monday, September 12 at 12:30 p.m. in the José Villalonga room of the City of Football, the group of referees of the Women's First Division will explain at a press conference the reasons for the indefinite break in their activity," said the RFEF in a release.

This announcement gives continuity to the one made this Thursday at the last minute by the women's arbitration group, where they communicated their "unanimous decision not to direct any match of the First Division National Championship in the current conditions of uncertainty" their "labour and economic" situation.

According to the referees and assistants, given "the context of a new professional competition", "female refereeing must have minimum conditions" to be able to carry out their work. "It is not conceivable that the arbitration establishment is the only one that is left out of a growth that we consider as fair as necessary," they added.

"As referees we want to provide the best possible service to football and that necessarily involves having minimum working conditions similar to those of the refereeing establishment of the men's professional competition," the referees stressed.

And to achieve this, they make it clear that they must have "comparable working conditions" that allow them to "devote the essential time required to be in a professional competition." "We are looking forward to stepping on the playing fields again, but with the right conditions," they sentenced.

This Friday, the Higher Sports Council (CSD) limited itself to showing its support for the collegiate members in order to "improve their current conditions, increase their salary and be recognized professionally."

As Council sources told Europa Press, after the meeting held this Friday with the RFEF and the LFPP, the body warned that it is "precisely" the arbitration committee that "according to the law, and in the absence of a coordination agreement, must establish the rules that have economic repercussions in the arbitration of professional competition".

"The Council will hold meetings between the parties starting next week to promote a negotiation that meets these objectives," added these sources, who stressed that, "due to the lack of a quorum between the parties," it also appointed the third member of the arbitration committee and to the third member of the competition committee for "the good development" of the competition.

The decision of the referees and assistants occurs less than 24 hours before the start of the first day of the F League, which was already forceful when knowing this plant. Thus, the LPFF directly accused the president of the RFEF, Luis Rubiales, of "a new episode of embarrassment", "which once again uses women as a battering ram to achieve its sole objective, to destroy Spanish women's football and prevent the women's professional soccer grow the way it is.

For the employers, the arbitration group is being "deceived" by Rubiales himself and by his management team, and recalled that their representatives and the federations "have been negotiating various organizational issues for some time, among which are agreeing on the conditions economics of the arbitration collective".

"And, within the framework of these meetings, the LPFF sent an important proposal two days ago to the representatives of the RFEF, by which the refereeing team would quadruple their emoluments, prioritizing an imminent agreement on the conditions of the referees and offering negotiate the rest of the aspects related to the arbitration function for next week," the LPFF pointed out.

In this sense, he describes as "regrettable, although not surprisingly", that they have not yet had "not even a response" from the federal entity, but that despite this, the LPFF "has never been closed to continue negotiating."

In addition, he confirmed that the League F clubs "continue with their sports planning and planned travel plans and will appear on the days and times set" for the dispute of their Matchday 1 matches, "as is their obligation, and as also it is from the arbitration teams officially designated by the Arbitration Committee this week".

"In this sense, from the LPFF we want to remember that the arbitration function is a delegated public function, so, if for any reason the day is not played, from the LPFF and its clubs all legal, disciplinary actions will be initiated. and damages, against all those who failed to fulfill their duties or had participated in, or instigated such non-compliance", stressed the employer.

This assured that "the project of women's professional football is a project of all, of the Clubs, of the footballers and of the referees". "And all parties must join this historical professionalization that must be progressive and sustainable. Only in this way will the great objectives that we all dream of be achieved", she sentenced.