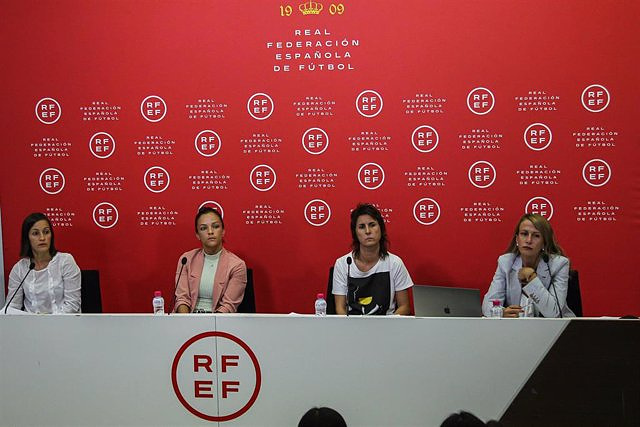 The members of the F League stressed this Monday that they do not receive "orders from anyone" and that the decision not to whistle this weekend on the first day of the competition was "exclusively" theirs, describing the decision as "intolerable lack of respect" accusation of the Professional Women's Football League (LPFF) of having been "manipulated" by the Royal Spanish Football Federation (RFEF).

"The decision to stop has been exclusively ours, independence is the most sacred thing we have, we do not receive orders from anyone. It has been an intolerable lack of respect on the part of the LPFF to accuse us of being manipulated," said international referee Marta Huerta de Aza at a press conference where she was accompanied by her colleagues Guadalupe Porras and Marta Frías, and by Yolanda Parga, head of RFEF Women's Arbitration.

The Tenerife collegiate told the employers that they have "elected" their own representatives and that their "house is the RFEF". "We invite them to come here. We sat here 10 days ago and we already gave a desperate cry for help because after two months we had not received any response," she said.

"We have been fully informed. We know that the RFEF asked the CSD to mediate and the League refused. We have not blocked women's football, we are part of it and we want to grow at the same level. Now we have a professional league and the only We are a non-professional class," added Huerta de Aza.

She thanked "the support provided from the beginning by the RFEF and colleagues from professional football and the lower categories" and also from "players and teams", especially the clubs for their "solidarity" in signing the LPFF document to exercise legal actions. "We know that they fought for the same thing and they are with us in this fight, also UEFA and FIFA, with Pierluigi Collina showing us his support in this cause and telling us that he is behind us for whatever we need", remarked the Tenerife native.

The international collegiate warned that they have not yet "heard" whether the LPFF "wants or not" that they be professionals and that only José Manuel Franco, president of the Higher Sports Council (CSD) "has spoken", but that this matter "does not It's among his powers."

In this sense, he made it clear that the employer's offer of 3,300 euros "doesn't even reach the minimum wage, which is 14,000 euros." "We want to be covered. We are sorry for all the inconvenience to the players and fans, but we have also worked very hard to be in this competition, but not in these conditions," he said.

Huerta de Aza is clear that he has "good will", but that "the other party does not" and was critical of the LPFF's invitation to attend a meeting this Monday without the RFEF's protection so that they can explain their offer. "It is illegal to negotiate on our own, we could even enter into international sanctions," she stressed.

"We are not against anyone, we are defending our rights. If someone has understood this as a war, it is not our problem, we all go together. Shame and ridicule, as we have read, is to be claiming for a minimum. How Do I have to pay for myself every time I have to travel from Tenerife? With 3,300 euros we can do little," he asserted.

The Spanish referee believes that "perhaps the League has not given all the information" and was clear about her position ahead of this week's Copa de la Reina, despite the fact that the competition depends on the RFEF. "If we are designated and there is no agreement, we are not going to whistle," she sentenced.

MARTA FRÍAS: "IT IS NOT ONLY SOMETHING ECONOMIC, THEY ARE OUR RIGHTS"

For her part, Marta Frías pointed out that the 21,000 euros that have been published that they are asking for is something that is proposed "as a final objective" and that everything be progressive, "something that the CSD has recognized is reasonable". "All expenses are included there, not exclusively what we are going to charge," she warned.

"We have not paralyzed women's football, we are willing to go out and whistle. We are claiming our rights because if you get injured, you don't get paid, if we don't whistle, we don't get paid. It's not just something economic," she explained.

The Aragonese collegiate also finds it impossible to sit down to "negotiate" with an LPFF that is "reporting" them and that "has been threatening all week." "We are a body of the RFEF. We want to negotiate and we have the maximum will. I have been in arbitration for 21 years and I have not contributed any day. We have not stopped women's football for 36 hours, we have been there for two months and we feel that they have ignored us" , he remarked.

Finally, Guadalupe Porras Ayuso referred to the economic issue asking "how much is the dignity of a female athlete who works one hundred percent and with 24 hours dedicated to arbitration worth" and stated that "the amounts that are said are not correct in many cases", claiming at least "a sixth part" of the arbitrators of LaLiga Santander or "a third" of those of LaLiga SmartBank and pointing out that "nothing has been derived to arbitration" of the five million euros that the CSD put up.

"How are we going to sit down to negotiate with someone who is painting our faces? We know that José Manuel Franco has no powers, but it is important to know that he put all his efforts so that there was an agreement," he asserted.