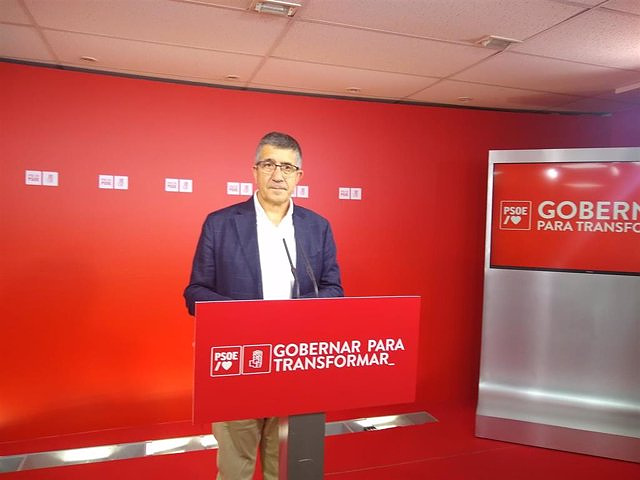 The spokesman for the PSOE in the Congress of Deputies and ex-lehendakari, Patxi López, has called on the president of the PP, Alberto Nuñez Feijóo, "to put order, once and for all", in his party because not complying with the measures of the Plan of energy savings, established by decree law, would be "committing a crime" and would have to answer to the courts for it.

López, who has appeared at a press conference at the headquarters of the PSE-EE in Bilbao, has highlighted that the Government's Energy Savings Plan does not imply the closure of companies or cuts in households, something that, as he recalled, was requested by the leader of the popular "barely ten days ago".

However, he recalled that, later, statements by PP leaders have been heard, such as those of the president of the Community of Madrid, Isabel Díaz Ayuso, who threatened not to abide by the decree, which leads them to ask Feijóo that, "Once and for all, because this is not the first time this has happened, put order in your ranks, put order in the Popular Party, and make them understand that the laws in a democracy are obeyed, period."

In his opinion, "not complying or giving freedom, as the PP spokesman said yesterday, to comply or not with this decree is simply to give impunity to commit a crime", and it is something for which one would have to answer in court.

"Breaching or not wanting to comply with the decree is to stand against the EU, to show absolute lack of solidarity with our European partners, but also lack of solidarity with Spain and with the Spaniards because, with this, we are trying to prevent greater evils, that there are closures of companies or that has repercussions in cuts in the consumption of families", he indicated.

For the socialist leader, the Savings Plan is "a collective effort against the unsupportive selfishness of the Popular Party." "Therefore, Mr. Feijóo put order and show that they are a serious party", he has pointed out.

(There will be expansion)

‹ ›
Keywords:
FeijóoPSOEEficiencia EnergéticaPPPatxi LópezCongreso De Los Diputados
Your comment has been forwarded to the administrator for approval.×
Warning! Will constitute a criminal offense, illegal, threatening, offensive, insulting and swearing, derogatory, defamatory, vulgar, pornographic, indecent, personality rights, damaging or similar nature in the nature of all kinds of financial content, legal, criminal and administrative responsibility for the content of the sender member / members are belong.
Related News