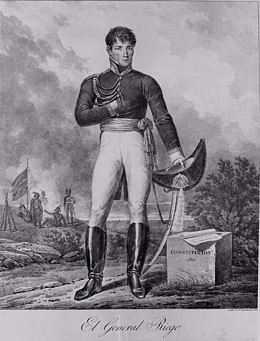 The PSOE wants Congress to recognize the figure of General Rafael del Riego who, with the pronouncement in favor of the 1812 Constitution that he carried out in 1820 in the Sevillian town of Las Cabezas de San Juan, gave way to the Liberal Triennium, of which now commemorates the bicentennial.

With the aim of paying tribute to what they consider "one of the key figures" in the contemporary history of Spain, the Socialists have registered a non-law proposal for debate in the Constitutional Commission of the Lower House.

In its initiative, picked up by Europa Press, the PSOE highlights that the Liberal Triennium, which lasted until 1823, was the first period of continuous parliamentary activity in our country during which it was possible to put into practice throughout the national territory some of the measures devised in the Cortes of Cadiz.

A deputy for his native Asturias, Riego became president of the Cortes in 1822 for only one month, but that served him to make some important decisions such as the creation of the 'Diario de Sesiones', then called 'Diario de Cortes'.

The socialists remember how, at the solemn opening of that legislature, Rafael del Riego reminded Fernando VII that "the true power and greatness of the monarch consists solely in the exact fulfillment of the laws and that the task of the Cortes was to "ensure forever the enjoy the freedoms of the Spanish people".

In addition, they point out that during his presidency, the resignation of two deputies to a quarter of the allowances they received was unanimously agreed in order to "contribute to alleviating public emergencies." And they add that he himself renounced the pension of 80,000 reais that the Cortes themselves had granted him as a "national reward", an unacceptable aid, according to what he said, for his "principles" and his "heart" of "honest man".

"The Courts (...) will not endeavor to distress my heart or make me look at myself with eyes of disapproval and bewilderment. I am not rich; plus the salary of destiny that the Homeland has entrusted to the care of my short lights and talents satisfied and with advantages, all my needs", argued the general.

For all this and for "his contribution to the consolidation of freedoms", the PSOE proposes that Congress recognize his figure, as well as the role of the Las Cabezas de San Juan City Council as the historical setting for the pronouncement that paved the way for the Liberal Triennium.

General Riego was hanged in Madrid's Plaza de la Cebada seven months after the entry into Spain of 'The hundred thousand children of San Luis', the French soldiers who helped restore absolutism in the figure of Ferdinand VII.

‹ ›
Keywords:
PSOE
Your comment has been forwarded to the administrator for approval.×
Warning! Will constitute a criminal offense, illegal, threatening, offensive, insulting and swearing, derogatory, defamatory, vulgar, pornographic, indecent, personality rights, damaging or similar nature in the nature of all kinds of financial content, legal, criminal and administrative responsibility for the content of the sender member / members are belong.
Related News