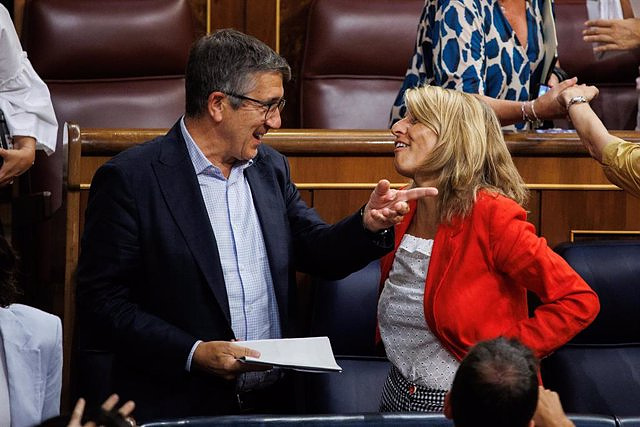 The socialist spokesman in the Congress of Deputies, Patxi López, has indicated this Tuesday that the proposal of the second vice president and Minister of Labor, Yolanda Díaz, to cap the price of basic foodstuffs is "of dubious legality" for what he proposes "act in other fields".

In this sense, the parliamentary spokesman for the PSOE has indicated that it is better to opt for other ways, such as, as he has exemplified, with the Food Chain Law. "It was in great demand" and it is "a first conquest" so that the agri-food sector "does not have to sell its products below cost", he said.

"We help in the way that we can help and not committing something that could be illegal," he has sentenced.

Likewise, he also recalled that the Executive has acted with "many policies" to help consumers to "sustain in some way" their purchasing power. Thus, he has made reference to the rise in the minimum wage or the rise in pensions with the CPI.

The proposal of the Minister of Labor and Social Economy, Yolanda Díaz, advocates reaching an agreement with large retailers and consumers to cap the prices of basic foods.

"There is nothing that stresses people's lives more than not being able to make the shopping basket, and this is happening in our country," said the Vice President of the Government, who blames "business margins" for part of the rise of prices. In this sense, she has pointed out that "someone" is getting rich along the way and is using war.

‹ ›
Keywords:
PSOEPatxi LópezCongreso De Los DiputadosYolanda Díaz
Your comment has been forwarded to the administrator for approval.×
Warning! Will constitute a criminal offense, illegal, threatening, offensive, insulting and swearing, derogatory, defamatory, vulgar, pornographic, indecent, personality rights, damaging or similar nature in the nature of all kinds of financial content, legal, criminal and administrative responsibility for the content of the sender member / members are belong.
Related News