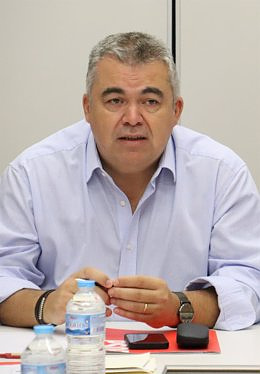 The Secretary of Organization of the PSOE, Santos Cerdán, has assured today that the 'Feijóo effect' is "diluting" despite the polls that continue to give him an advantage. In his opinion, the reading to be made of the barometer published today by El País is that the more the citizens know the leader of the PP, "the more he is losing."

This is how the socialist leader spoke at the PSOE headquarters in Madrid's Ferraz street when asked about the survey published today by the aforementioned newspaper, carried out by 40dB and which gives 29.4 percent of the vote to the PP and 26, 3 percent to the PSOE, widening the gap between the two and reflecting that the 'popular' vote is dragged from both the socialists and the extreme right.

"I deny the head of the survey," exclaimed Santos Cerdán, whose interpretation of this barometer is different. Thus, he has stressed that the PSOE and PP have a "technical tie" in the direct vote, but he considers that citizens lean towards the socialists when asked which party would protect citizens more in the current scenario of rising inflation.

In this sense, he has emphasized that the answer to this question is that high incomes and large companies bet on the PP, while the self-employed, farmers, ranchers and middle classes think that it is the PSOE that best protects them, according to Santos Cerdan. "That's what the survey says beyond the headlines," he added.

He has also argued that the transfer of votes, which was greater when Feijóo was elected as head of the PP, "is correcting itself" and "is decreasing". What he has admitted is that "the PSOE vote is less mobilized today than that of the PP or Vox." For this reason, he has said that the 'Government of the people' campaign is being carried out since they have "that pending task".

His conclusion is that the so-called 'Feijóo effect' is being "undone". "The more he talks, the more the bread rises", he has exclaimed to add that this effect "doesn't work, it has deflated" because it was the effect, in his opinion, that was produced by "ignorance". However, "the more they know him, the more he loses and the more the seams show."

In addition, he has gone on to attack the president of the Popular Party for not having published his salary yet and breaching, he said, the Transparency Law. And he has reiterated his criticism for the non-renewal of the General Council of the Judiciary (CGPJ), once again blaming the PP.

As he has said, what this country needs least is instability because "it is not good for Justice", contrasting the attitude of the Government that gives, he has said, institutional stability "despite the PP's no to everything with its far-right partners" .

The Secretary of Organization of the PSOE has also wanted to deny that there is going to be a "super electoral Sunday" in reference to the possibility of holding regional and general elections at the same time. "With the elections I am going to make it clear, totally ruling out that great Sunday, the elections when they touch, for that reason I have remarked it", has added.

Regarding the announcement by the President of Asturias, Adrián Barbón, that the former Deputy Secretary General of the PSOE, Adriana Lastra, will lead the list to Congress for this autonomous community, he has admitted that it is an "extemporaneous" announcement, but has said that he respects the will of the Asturians.

Santos Cerdán has also spoken out when asked about the tax reduction competition unleashed between the autonomous communities and has said that "coordination with the barons is permanent even in discrepancies." And he has argued the unity of the party, assuring that "it is difficult to recognize or see a PSOE like the one we have for unity and less media noise as there has been on other occasions in the PSOE." "That coordination exists", he has concluded.

The socialist leader has also referred to the PSOE candidate for mayor of Madrid, assuring that the PSOE "has a candidate", but it will be the general secretary of the party in the Community of Madrid, Juan Lobato, who will announce it "when he deems it" opportune by strategy. "It is what he explained to the Federal leadership and we respect it", he explained.

‹ ›
Keywords:
FeijóoPSOEPP
Your comment has been forwarded to the administrator for approval.×
Warning! Will constitute a criminal offense, illegal, threatening, offensive, insulting and swearing, derogatory, defamatory, vulgar, pornographic, indecent, personality rights, damaging or similar nature in the nature of all kinds of financial content, legal, criminal and administrative responsibility for the content of the sender member / members are belong.
Related News