They urge Feijóo to speak after the 'popular' senator updated her declaration of assets last week. 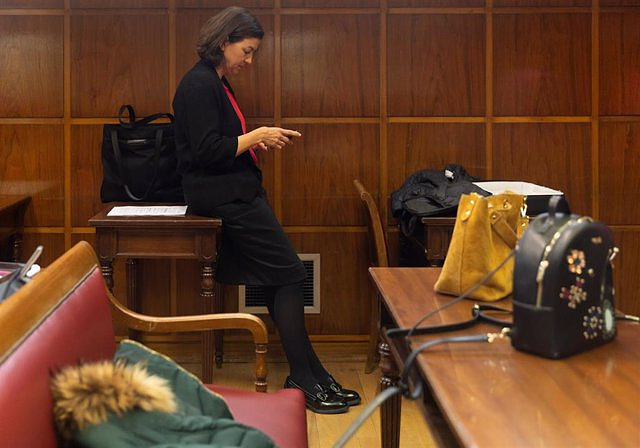 The Socialist Group in the Senate has resorted this Thursday to the Code of Conduct of the Cortes Generales to request the president of the Chamber, Ander Gil, after consulting the Table, to open a parliamentary investigation into the assets of the mayoress of Marbella and senator 'popular', Angeles Muñoz.

This was announced by the PSOE spokesperson in the Senate, Eva Granados, at a press conference from the Upper House after registering this request, after Ángeles Muñoz updated his declaration of assets last week to include the acquisition of 100 % of a company and a house in Sweden.

According to the text registered this Thursday by the Socialists, to which Europa Press has had access, the parliamentary investigation procedure that they propose would have to go through the Committee on Incompatibilities of the Senate, which must hear the PP senator and mayoress of Marbella, and will conclude with the issuance of the report declaring the existence or not of a violation of the Code of Conduct and proposing, where appropriate, the appropriate legal measures.

In this way, now it will be the president of the Senate who will have to decide whether or not to open this parliamentary investigation into the 'popular' senator, although the Socialists have also included in their text a prior consultation with the House Committee to force the 'popular' members to pronounce on this aspect.

This is the first time that a group in the Senate has resorted to the Code of Conduct of the Cortes Generales, which was approved on October 1, 2020. In this case, the Socialists have invoked article 9, which talks about the procedure of infractions and sanctions to determine if there has been any infringement in cases of conflicts of interest.

As explained in this article, the report on the possible infringement will be sent to the corresponding Board that will order its publication in the Official Gazette of the Cortes Generales and will resolve, in accordance with the Regulations of the Chamber, what is appropriate in relation to the sanction that is proposed in his case.

As explained by Eva Granados, the objective is to act "with the utmost diligence and urgency" so that the 'popular' senator can clarify her assets and update her declaration of assets for the last week.

A LONG STATEMENT OF MOTIVES

In the text sent to the president of the Senate, the Socialists have made an extensive defense of the reasons that have led her to request this parliamentary investigation, going through the journalistic information on her husband's alleged irregular activities.

In addition to updating her declaration of assets and income, the PSOE has also accused the mayoress of Marbella of "indicatively committing" various falsehoods in her official documents. "Various news reports have confirmed that in 2010 the Mayor took out life insurance through a mortgage loan guaranteed with her mansion, which was valued at 4.7 million euros," argue the Socialists.

"This fact does not appear in their asset declarations made before the Marbella Town Hall, which also did not reflect the existence of a mortgage loan contracted with the entity Nordea Bank, based in Luxembourg," they add.

During the press conference, Eva Granados has once again urged the leader of the PP, Alberto Núñez Feijóo, to rule on these alleged irregularities, alleging that he is the president of the Popular Group in the Senate and that the mayoress of Marbella herself sits a few rows behind his seat.

In this context, the socialist spokesperson has denounced that Feijóo is acting with "passivity and silence" in the face of this information about the mayoress of Marbella.

Last week, the general coordinator of the PP, Cuca Gamarra, wanted to close the controversy of the mayoress of Marbella by considering her explanations about the prosecution of her husband and one of his sons for money laundering.

‹ ›
Keywords:
PSOESenadoMarbella
Your comment has been forwarded to the administrator for approval.×
Warning! Will constitute a criminal offense, illegal, threatening, offensive, insulting and swearing, derogatory, defamatory, vulgar, pornographic, indecent, personality rights, damaging or similar nature in the nature of all kinds of financial content, legal, criminal and administrative responsibility for the content of the sender member / members are belong.
Related News