Patxi López considers it a "democratic scandal" that there are members of the Judiciary "who say they are not going to comply with the law". 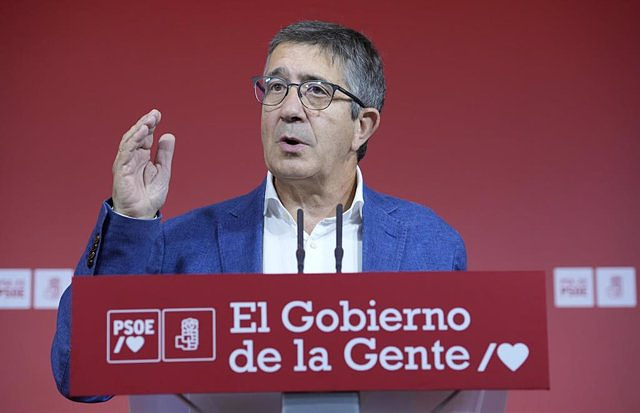 The spokesman for the PSOE in Congress, Patxi López, stated this Thursday that the ultimatum launched by the president of the Supreme Court and the General Council of the Judiciary, Carlos Lesmes, for the Government and the PP to renew the government of the judges can open a new stage to unlock the constitutional bodies.

In statements to the media in the courtyard of Congress, he has also stated that he considers "a democratic scandal" that there are members of the CGPJ "who say they are not going to comply with the law", while accusing the PP of having "kidnapped" to the Judiciary.

This Wednesday, Lesmes urged the President of the Government, Pedro Sánchez and the leader of the opposition, Alberto Núñez Feijóo, to meet again to end the blockade of almost four years that the CGPJ accumulates and threatened to present his resignation.

In this sense, the socialist spokesman has indicated that these words can open "a new scenario" for the renewal of members, despite the fact that the Government cooled down this possibility by pointing out --after Lesmes' words-- that Sánchez had already met with Feijóo last April and by blaming the 'popular' leader for throwing away the agreement that the Executive had with the previous leadership of the PP.

López made these statements when asked about the possibility of modifying the law – in case the blockade continues – to reduce the majorities necessary to undertake these renewals, as requested by his government partner, United We Can. Therefore, and given the possibility that in his opinion opens up, he has asked "not to put more sticks in the wheels."

In addition, regarding the possible resignation of Lesmes to force the unblocking, the socialist spokesman has indicated that "it would not be good news either" and has urged the members "who say they are not going to comply with the law, reconsider" and sit down to negotiate . Likewise, the PP has asked him to "put their names on the table" and begin to agree.

Finally, he has accused the 'popular' of having "kidnapped" the judiciary and the government of the judges, something they do every time they do not govern, as he has pointed out. In his opinion, with the will that the majorities that do not obtain in the elections "are rigged through sentences", he has pointed out. "That is a democratic scandal and it speaks of the little democratic culture of the PP", he has finished.

‹ ›
Keywords:
PSOEPPPatxi LópezTribunal SupremoCGPJ
Your comment has been forwarded to the administrator for approval.×
Warning! Will constitute a criminal offense, illegal, threatening, offensive, insulting and swearing, derogatory, defamatory, vulgar, pornographic, indecent, personality rights, damaging or similar nature in the nature of all kinds of financial content, legal, criminal and administrative responsibility for the content of the sender member / members are belong.
Related News