The government spokesperson, Ximo Puig, Guillermo Fernández Vara and Patxi López, the most critical of the president of Castilla La Mancha. 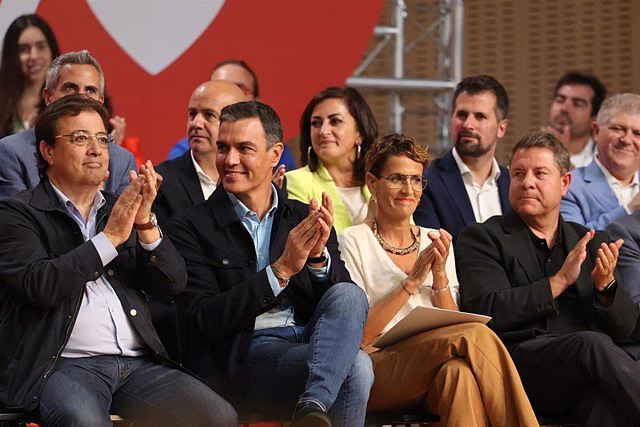 The government spokesperson, Ximo Puig, Guillermo Fernández Vara and Patxi López, the most critical of the president of Castilla La Mancha

Several positions of the PSOE and the Government have rejected the declarations of the president of Castilla la Mancha, Emiliano García Page, for criticizing the policy of pacts of the Executive and his strategy against the leader of the opposition, Alberto Núñez Feijóo. Only one of the socialist barons, the Aragonese Javier Lambán, has left the official discourse by recommending that the controversy be downplayed.

Other socialist positions such as the president of the Valencian Community, Ximo Puig, that of Extremadura, Guillermo Fernández Vara and the PSOE spokesman in Congress, Patxi López, have more or less vehemently criticized García Page's words.

The leader of the Socialists of Castilla La Mancha stated in an interview published on Monday that he has a good political and personal opinion of Feijóo, does not share or identify with the description of "insolvent" and does not consider it correct.

In this way, he showed his disagreement with the fundamental message of the Prime Minister, Pedro Sánchez, in the debate he had with the president of the PP in the Senate at the beginning of the month. In addition, Page questioned the "companies" of the Executive in reference to its partners and rejected that companies are now being attacked when until recently the red carpet was laid out for them.

Thus, the Government spokeswoman, Isabel Rodríguez, -who like Page is from Castilla La Mancha- again accused the PP leader, Alberto Núñez Feijóo, of insolvency on Tuesday, thus reaffirming the Government's message against him. "Either it is insolvency or bad faith", she has affirmed, while she has pointed out that he prefers to think that it is the first because he would have a remedy, but the second has "bad arrangement".

When asked about this matter, Rodríguez avoided making further comments on Page's words. "I have nothing to say, they are her own statements and her own words and she is responsible for them," she has indicated. However, sources from Moncloa specified that they think he was not successful, and they only find an explanation in his personal character. "He is like that," they point out.

The spokesman for the PSOE in Congress and former Lehendakari, Patxi López, also replied to Page by pointing out that one is not in the Government to "be comfortable" but to provide solutions to the problems of citizens and that, if the PSOE has agreed with Bildu issues such as the increase in pensions or the creation of the minimum vital income, has been because the PP has refused to support these measures.

In this way he responded to the warning issued by the leader of the Castilian-La Mancha PSOE about the "bad company" of the Government, in reference to his nationalist and independentist parliamentary partners.

"Some say that dangerous friendships punish us, but a government is punished for not governing, not for assuming its responsibility and giving answers to the problems of citizens, which is what this government is doing," López emphasized without no one asked him about Garcia Page.

The only one who has shown indulgence with his party partner has been Javier Lambán, who has recommended "remove iron and not take his statements out of context." Thus, he has argued that the PSOE has never been "a court of the Inquisition" and that is why he is a member of it, while asking "not to contribute to further fueling the controversy", and rejecting the "wrong conclusions" about the statements of Page.

Likewise, the president of Aragón --along with Page, one of the most critical of Pedro Sánchez-- has asserted that "the PSOE is a political and electoral machine that is gearing up for the next challenges and, at the head of all, fighting for the socialist victories, there will be García-Page".

On the contrary, the Valencian Ximo Puig has indicated that "we must try to be consistent" and has reminded him that in the Federal Political Council that the PSOE held last Saturday there was a "generalized" agreement regarding a political strategy.

When asked if he understands the criticism issued by Page, Puig has indicated that he is not here to comment on the statements of other presidents but that "there is a fundamental value that is coherence," he added.

Along the same lines, Fernández Vara has also taken a position against Page by pointing out that "one cannot be loyal to Spain if he is not loyal to his project." In addition, he has indicated that generating "confusion, debate and internal division" does not lead to anything and is not good for the country, as he has maintained.

In a more conciliatory tone, the leader of the Basque Socialists, Eneko Andueza, has stated that he "very much" respects the opinion of his fellow party members and that the aforementioned statements show that any militant or organic leader can express himself freely . In any case, he has highlighted that he remains with "the climate of unity and work" that was experienced last Saturday in Zaragoza.

‹ ›
Keywords:
FeijóoPSOEJavier Lambán
Your comment has been forwarded to the administrator for approval.×
Warning! Will constitute a criminal offense, illegal, threatening, offensive, insulting and swearing, derogatory, defamatory, vulgar, pornographic, indecent, personality rights, damaging or similar nature in the nature of all kinds of financial content, legal, criminal and administrative responsibility for the content of the sender member / members are belong.
Related News