In 2021, terrorism brought together more than 30% of the Prosecutor's Office proceedings: 97 on jihadism and 41 related to ETA. 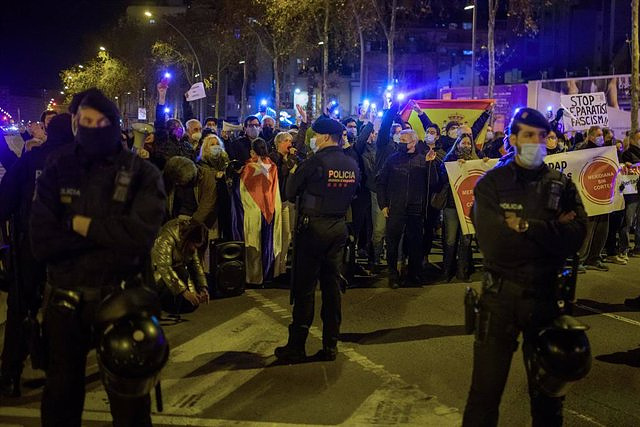 In 2021, terrorism brought together more than 30% of the Prosecutor's Office proceedings: 97 on jihadism and 41 related to ETA

The State Attorney General's Office has warned of an "upturn" in street violence in the Basque Country and Navarra during 2021, while "radical militancy declines" in Catalonia within what it qualifies as the "Violent Catalan Independence Movement". Terrorism brought together more than 30% of the Prosecutor's Office proceedings: 97 related to jihadism and 41 to ETA.

Specifically, the Public Ministry refers to the "genuine, coordinated and dynamic network" that emerged around the referendum of October 1, 2017 in Catalonia, and then maintains that currently "it has declined at the same rate as the radical militancy has been abandoning direct action".

This is stated in the Report of the State Attorney General's Office for 2021, consulted by Europa Press, which warns of the "rebound in violent acts in the Basque Country and Navarra, subsumed within radical violence of an independence character." In this sense, he cites the role played by the creation at the county level of the Kontseilu Sozialista (Socialist Councils).

"The new currents that have emerged within the pro-independence left in the Basque Country and Navarra have experienced a notable growth in their organizational and mobilizing capacity at the regional level after the creation of the Kontseilu Sozialista (Socialist Councils), which has meant a further step in the articulation of the Socialist Movement as an alternative to the project of the nationalist left in the Basque Country and Navarra", warns the Prosecutor's Office.

The situation of street violence in the Basque Country and Navarra contrasts with that of Catalonia. "2021 has been, due to different sociopolitical factors, a year of meager violent activity in the field of this threat compared to previous ones." The Public Ministry alludes as causes to the health crisis due to COVID-19, which has caused the "decrease in pressure and mobilization of the radical and violent Catalan independence movement".

However, it alludes to the "maintenance of symbolic actions", such as the daily blockades of Meridiana avenue in Barcelona and other weekly protests on various bridges over highways.

"What in the 2017-2019 stage constituted a genuine network, coordinated and dynamic, for the exercise of mostly low-intensity street violence," says the Prosecutor's Office in reference to the protests around the 1-O referendum, "has declined at the same rate that radical militancy has been abandoning direct action".

In this sense, he recalls the two arrested by the Civil Guard linked to the l'Estaca collective for simultaneous sabotage in various radars located in different parts of the Catalan geography and the other four arrested on October 1 at the demonstration in Barcelona for the anniversary of the illegal referendum.

The Prosecutor's Office also focuses on the extreme right-wing groups of the "Nazi orbit" that focus "on those known as menas (unaccompanied minors) or on the LGTBIQ movement, "whose members they accuse of being benefactors of the aid and public resources to the detriment of national ones.” He speaks above all of public order altercations and the increase in messages from these small groups in forums and social networks.

He then cites the extreme left-wing groups and the violent demonstrations, mainly after the conviction of rapper Pablo Hasél. Including attacks against agents and dependencies of the State security forces and bodies.

"In a scenario of notable increase in ideological polarization, the groups of the extreme left and anti-fascist maintain a vigilant attitude and respond to any call or activity scheduled by the antagonistic bloc that makes up the extreme right," exposes the Public Ministry.

‹ ›
Keywords:
ETATerrorismo
Your comment has been forwarded to the administrator for approval.×
Warning! Will constitute a criminal offense, illegal, threatening, offensive, insulting and swearing, derogatory, defamatory, vulgar, pornographic, indecent, personality rights, damaging or similar nature in the nature of all kinds of financial content, legal, criminal and administrative responsibility for the content of the sender member / members are belong.
Related News