The ETA demands to clarify both the facts of ETA and the episodes of "torture" in police headquarters. 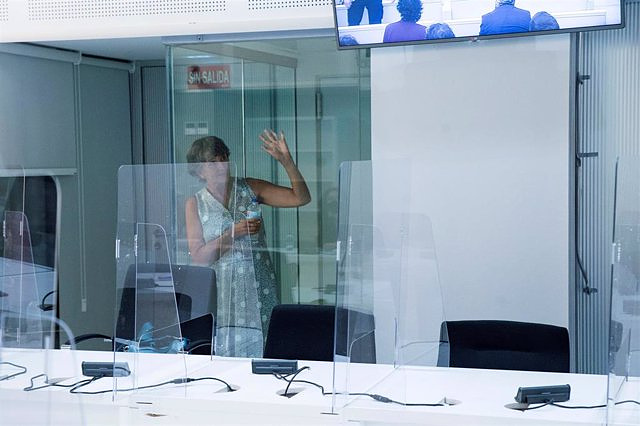 The Prosecutor's Office has reiterated this Tuesday at the National High Court (AN) its request for 488 years in prison for the former head of ETA Soledad Iparraguirre, alias 'Anboto', in the trial on the frustrated attack against the National Police on May 19, 1985 in Vitoria during a football match. In the last session, the prosecutor considered it proven that he drove the car bomb to the stadium and identified her as 'Angelines', the name by which an exertzaina already convicted of these acts referred to her.

However, in his final argument to maintain the accusation against 'Anboto', the prosecutor Carlos Bautista has prioritized the expert report made in 2019 that identified four prints of the accused on the steering wheel of the car bomb, with which the terrorist group tried to kill at least 21 national police officers.

The representative of the Public Ministry has highlighted that with this report "it can be proven" that 'Anboto' is "the only person who was behind the wheel" until the Mendizorroza stadium.

"The experts have clearly said that there were 12 identification points and none against," said the prosecutor to refer to what was explained by the two police officers who wrote that report, who intervened in the trial on Tuesday. He has also wanted to emphasize that this is the "only expert evidence", since in the other, which was done in 1989, they were not asked to compare it with those of 'Anboto'. On that occasion only one was located and it was attributed to Eusebio Arzalluz, 'Paticorto'; the rest remained as "anonymous".

With this argument, the prosecutor wanted to make it clear that the only valid expert report is the last one, that of 2019, before explaining that it was he who requested to compare the fingerprints considered anonymous with those of the accused in the face of technological advances in databases. fingerprint data and after the AN managed to convict José Javier Arizcuren Ruiz, 'Kantauri', for the attack on the Civil Guard barracks in Llodio (Álava) in 1985, after finding his DNA in cigarette butts that he had smoked while preparing it.

"All" the footprints "identify" 'Anboto' "as the person who drives the car bomb to the place where it appears," insisted the prosecutor, who has rejected that this accusation is part of a "witch hunt" against members of ETA. "None, neither conspiracies nor rare elements," he stated, adding that after "many years" investigating the terrorist group, "one knows where to look."

It should be remembered that this trial has been held again after the Supreme Court annulled the acquittal issued in favor of 'Anboto' and ordered it to be repeated and another sentence issued, considering that the first court of the National High Court omitted evidence of traces "with a non-rational argumentation".

The Supreme Court revoked the acquittal because, in its opinion, the first court of the AN made a "serious mistake" and its foundations were wrong: "It starts from a premise that, as is obvious, is false", since the first report He does not deny that there were traces of the accused, but rather that they were filed as anonymous.

But beyond the discussion about the fingerprints, the Public Prosecutor's Office has pointed to previous statements by witnesses in which they acknowledged having coincided with 'Anboto' in the 'Araba command', but above all by former Basque police agent José Miguel Suescun, sentenced to prison for collaborating with ETA in this attack and who stated that he had known the accused as "Angelines".

Likewise, the prosecutor has denied the accused herself, who admitted in a previous trial that she belonged to the same command in 1987, when yesterday she declared that her entry into ETA was later, in 1990.

From his point of view, 'Anboto' intends to come out of this case unscathed because if they add more years to the more than 300 for which she has already been sentenced, since the compliance limit is 30, she could not spend more time in the prison, but with fewer sentences and pending trials this can favor him in prison permits.

For his part, the defense attorney has requested his acquittal on the understanding that there is "sufficient and valid evidence." "In summary, some co-defendants place her in the command and others do not, some in the facts and others not, some in photographs" but that are not hers, she pointed out, to criticize at the same time the new fingerprint expert, which arrives "34 years later" and "without the photographs and the corresponding graphic report that must accompany".

The defense of 'Anboto' has described the summary of the case as "disorder" because it was lost and "pages are missing" from the statements of some witnesses. Of those that incriminate her, the lawyer has denounced that they occurred in police headquarters and under "torture".

In her final turn, the defendant criticized Spain for not providing any evidence of fingerprints against her while requesting that she be extradited from France and said that in order to clarify the facts related to ETA, the episodes of " torture" against its members in police headquarters.

The former head of the gang declared yesterday that when the events occurred she was not in the Basque Country, but in France. To questions from her lawyer, the only party to which she responded, Iparraguirre adjusted to the statement of December 2020, during the first trial, when she pointed out that at that time she was "hidden" in the French Basque Country, studying teaching and working as a teacher.

‹ ›
Keywords:
Audiencia NacionalETATerrorismoVitoriaPolicía
Your comment has been forwarded to the administrator for approval.×
Warning! Will constitute a criminal offense, illegal, threatening, offensive, insulting and swearing, derogatory, defamatory, vulgar, pornographic, indecent, personality rights, damaging or similar nature in the nature of all kinds of financial content, legal, criminal and administrative responsibility for the content of the sender member / members are belong.
Related News