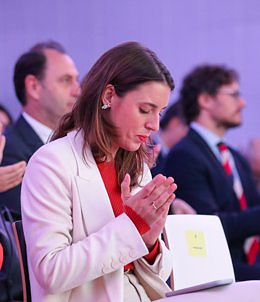 The Professional Association of the Magistracy has demanded the immediate resignation of the Minister of Equality, Irene Montero, after the "disqualifications" issued against the judges as a result of the review of certain sentences for crimes against sexual freedom as a result of the entry into force of the so-called 'only yes is yes' law.

In this context, the association admits criticism of judicial decisions but recommends that, if such criticism comes from another state power, it be done with the "balancing and prudence" demanded by the norms of institutional respect.

Thus, they consider the accusation by the minister and other political leaders of spreading a general prejudice against women in the Judiciary "offensive" and warn that it lacks rigor and produces an "unnecessary and devastating" alarm in the confidence of the victims of these crimes, thus devaluing the standards of democratic quality.

In the statement consulted by Europa Press, the judges have asserted that they are "firmly" committed to the protection of victims and that this entails diligent compliance with the obligations that result from applying the approved law.

The Association condemns the fact that "generalized disqualifications" based on stereotypes have been used "instead of honestly assuming the possibility that the norm may give rise to interpretations that can be resolved" and considers that it is a "totally reprehensible action because it is false and unfair ".

For all these reasons, the APM demands, as a result of the statements made by the minister, her immediate resignation as they add to her "constant attacks" on the country's judges who are "intolerable and inadmissible in a democracy."

‹ ›
Keywords:
Irene Montero
Your comment has been forwarded to the administrator for approval.×
Warning! Will constitute a criminal offense, illegal, threatening, offensive, insulting and swearing, derogatory, defamatory, vulgar, pornographic, indecent, personality rights, damaging or similar nature in the nature of all kinds of financial content, legal, criminal and administrative responsibility for the content of the sender member / members are belong.
Related News