The price of diesel rises 2% and that of gasoline resumes the declines and falls a slight 0.83% 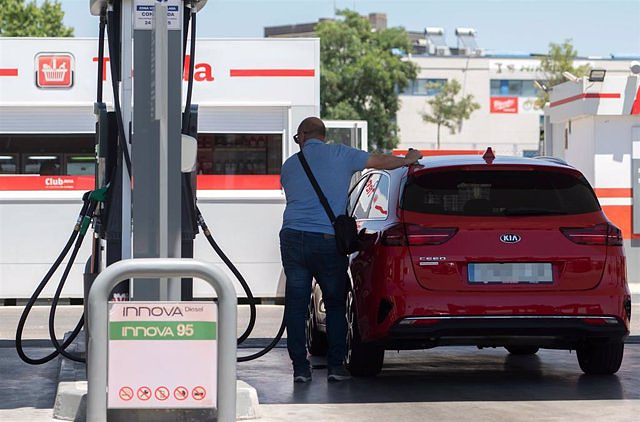 The average price of diesel has risen for the third consecutive week, thus consolidating the end of its downward trend of the last two months, while that of gasoline has fallen by 0.83%.

Specifically, the average price of a liter of diesel has risen this week by 2.07%, to rise to 1,921 euros, although at the moment it remains at a distance from the highs of the end of June, when it reached 2,141 euros per liter.

For its part, the average price of a liter of gasoline has resumed the declines, interrupted last week after chaining nine consecutive declines, and has fallen by 0.83%, to stand at 1.779 euros, according to data from the Petroleum Bulletin of the European Union collected by Europa Press.

In this way, the average price of a liter of diesel in Spain remains for the fourth consecutive week above that of gasoline.

This average amount of both fuels includes taxes, but does not reflect the discount that came into force since last April 1 of at least 20 cents per liter, since there are higher discounts, depending on the oil company and the promotions to customers. loyal.

Counting on this subsidy, the price of a liter of gasoline would be 1,579 euros, while that of diesel would be 1,721 euros, in both cases lower than what it marked at the end of March, before the entry into force of the aid --1,818 euros per liter in the case of gasoline and 1,837 euros for diesel--.

Despite the reduction in prices recorded throughout the summer, fuel prices continue to be especially high compared to recent years at this point in the year.

In this way, compared to the same week a year ago, the average price of a liter of gasoline is 25% more expensive, while in the case of diesel it has become almost 52% more expensive, although without taking into account the discount currently in effect.

Collecting the subsidy, the price of a liter of gasoline is 11.11% more expensive than in the second week of September 2021, while in the case of diesel the price is 36.04% higher.

These figures are recorded in an environment of high crude oil prices in the current context, marked by the war in Ukraine. However, this Thursday the barrel of Brent, a reference in Europe, was trading slightly above 88 dollars, while the American Texas was exchanged around 82 dollars.

The price of fuel depends on multiple factors, such as its specific price (independent of oil), the evolution of crude oil, taxes, the cost of raw materials and logistics, and gross margins. In addition, the evolution in the price of crude oil is not transferred directly to fuel prices, but rather with a time lag.

With these levels, the price of unleaded gasoline of 95% remains in Spain below the average of the European Union, located at 1,821 euros per liter, and of the eurozone, with an average price of 1,899 euros.

In the case of diesel, the price in Spain is higher than the EU average, which is 1,908 euros, but lower than that of the euro zone, with a price of 1,945 euros.

However, including the bonus of at least 20 cents per liter, the price of both fuels in Spain would be below the European average.

‹ ›
Keywords:
GasolinerasUcrania
Your comment has been forwarded to the administrator for approval.×
Warning! Will constitute a criminal offense, illegal, threatening, offensive, insulting and swearing, derogatory, defamatory, vulgar, pornographic, indecent, personality rights, damaging or similar nature in the nature of all kinds of financial content, legal, criminal and administrative responsibility for the content of the sender member / members are belong.
Related News