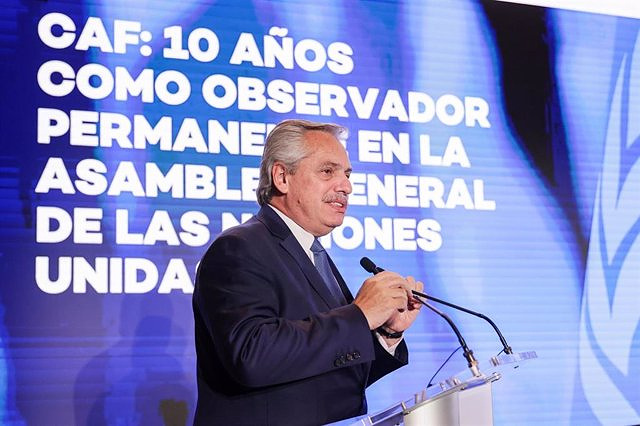 The president of Argentina, Alberto Fernández, assured this Tuesday before the UN General Assembly that the assassination attempt suffered by Vice President Cristina Fernández de Kirchner sought to "alter democracy."

"In Argentina, the attempt to assassinate the vice president not only affected public tranquility. It also sought to alter a virtuous collective construction that will be four decades old next year," he said, thanking "the solidarity" that the country has received "from the whole world" after the attack, according to 'La Nación'.

Speaking in New York before the United Nations General Assembly, in what was his first face-to-face speech before the world forum, Fernández maintained that "many times in history assassinations have been prologues to great tragedies" and "whole peoples succumbed behind those prophets of hate."

"I am sure that the fascist violence that is disguised as republicanism will not be able to change that broad consensus to which the vast majority of Argentine society adheres," he added, according to the Télam agency.

In this sense, he has warned that extremist and violent discourses have found "fertile ground to sow anti-political sentiment", and has disdained that "those who seek to weaken" democracies "have specific interests that lead them to promote extreme polarization".

"Let's not resignedly accept this situation. Let's generate an energetic global rejection of those who promote division in our communities," said Fernández.

On the other hand, Fernández has taken advantage of the UN General Assembly to ask the United Kingdom to resume talks to address the sovereignty of the Malvinas Islands.

In this sense, the Argentine president has reaffirmed the "legitimate and imprescriptible rights of sovereignty" of the country over the Malvinas, South Georgia, South Sandwich Islands and the surrounding maritime spaces, according to Télam.

In addition, he has denounced that the United Kingdom "aggravated the controversy" with an "unjustified and excessive military presence on the islands" and with "calls for the illegal exploitation of resources." However, he has expressed his willingness to resume "negotiations" with London.

"We ask the secretary general to renew his efforts in fulfilling that mandate and that the United Kingdom agree to heed the call of the international community and put an end to this anachronistic colonial situation," Fernández emphasized, reiterating to the British government to comply with UN resolution 31/49, which calls for the decolonization of the Malvinas Islands.

‹ ›
Keywords:
ArgentinaOnu
Your comment has been forwarded to the administrator for approval.×
Warning! Will constitute a criminal offense, illegal, threatening, offensive, insulting and swearing, derogatory, defamatory, vulgar, pornographic, indecent, personality rights, damaging or similar nature in the nature of all kinds of financial content, legal, criminal and administrative responsibility for the content of the sender member / members are belong.
Related News