The PP underlines its "unequivocal will" to renew the CGPJ, despite the "disqualifications" of the PSOE 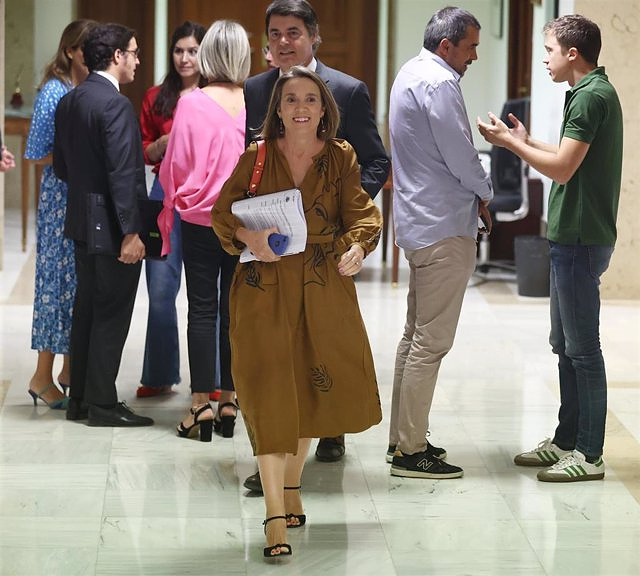 The PP spokesperson in Congress, Cuca Gamarra, has underlined this Thursday the "unequivocal will" of her party to renew the General Council of the Judiciary (CGPJ), without conditioning the appointment of its new members to a previous change of the law that sets their method of election, and has stressed that this is the "responsible" position of the 'popular', despite the "disqualifications" that the Government and the PSOE dedicate to them on account of this issue.

This is how Gamarra spoke, at a press conference in Congress, one day after the president of the CGPJ, Carlos Lesmes, urged the two major parties to renew a body that has expired since December 2018 and even threatened to resign.

Gamarra has pointed out that the PP is a "government party" that is "in a position to negotiate", that it is "responsible" and wants to "reinforce the separation of powers". Thus, he has recalled that the PP wants to change the law so that it is the judges who choose the judges, but stressing that they assume that the pending renewal must be done with the current law. Of course, he has made it clear that his party continues to defend the need to change the election system, although both issues can "be addressed separately."

In any case, in the PP they maintain that the renewal cannot be limited to putting some names on the table and insist that the candidates for renewal must meet certain conditions to guarantee the independence of the governing body of the judges.

"We have an unequivocal will to reach agreements, but not to an exchange of cards, but to a serious and responsible negotiation that guarantees the independence and professionalism of those who are going to occupy that body," said the also general secretary of the PP.

Asked if his formation would be willing to take the first step to resume negotiations with the Executive, Gamarra preferred not to advance if that is his intention, alleging that the CGPJ was meeting at that time. "Respect for independence and the separation of powers leads us to make calmer statements than the PSOE, which has no intention of changing its attitude," she said.

In this context, he has contrasted the "responsibility" with which, according to his defense, his party acts with the attitude of the Socialists, whom he sees installed in "disqualification and insult".

"They won't find us there because it goes against the prestige of the Judiciary," he said, censuring the Minister of Science, Diana Morant, for calling the leader of the PP, Alberto Núñez Feijóo, "spoiled," and the criticisms The socialist spokesman in Congress, Patxi López, also dedicated this Thursday. "This is not the way," he warned.

‹ ›
Keywords:
PSOEPPCGPJ
Your comment has been forwarded to the administrator for approval.×
Warning! Will constitute a criminal offense, illegal, threatening, offensive, insulting and swearing, derogatory, defamatory, vulgar, pornographic, indecent, personality rights, damaging or similar nature in the nature of all kinds of financial content, legal, criminal and administrative responsibility for the content of the sender member / members are belong.
Related News