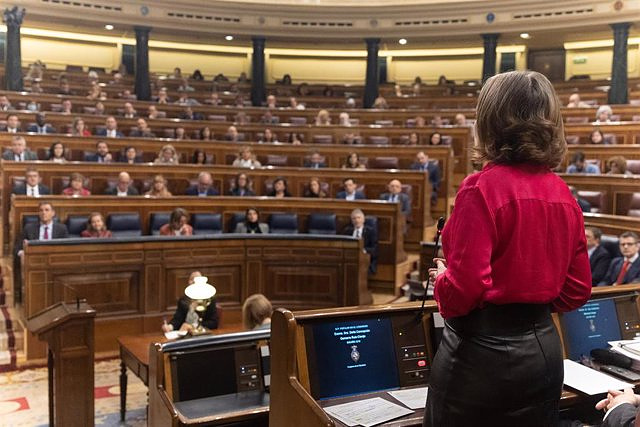 The PP has convened this Thursday at the doors of Congress a concentration of the deputies and senators of the Popular Group to request the resignation of the Minister of Equality, Irene Montero, and the "rectification" of the law of 'only yes is yes' that It is "causing the reduction of sentences for dozens of sexual offenders," according to the formation.

The call comes one day after the Minister for Equality has accused the PP in plenary session of the Chamber of "promoting the culture of rape that calls into question the credibility of the victims", using the campaigns against violence as an example. that the 'popular' governments have launched in autonomous communities such as Galicia or the Community of Madrid.

The general secretary of the PP and parliamentary spokesperson in Congress, Cuca Gamarra, and the spokesman for the Popular Group in the Senate, Javier Maroto, will lead tomorrow at 11:00 a.m. that concentration of PP deputies and senators to request the resignation of Irene Montero . There they will make statements to the media, as reported by the party.

After this new row in Congress, the leader of the PP, Alberto Nuñez Feijóó, has assured that the Minister of Equality cannot "give lessons" to others after the reductions in sentences caused by his law of 'only yes is yes' and has summoned her to "collect her office" and resign, instead of "muddying" Spanish politics.

"What this minister should do, in my opinion, is simply pick up her office," Feijóo declared. In addition, she has said that she "understands" that Montero is going through one of her "worst moments" and has asked her "not to be nervous" and "please take responsibility for her."

‹ ›
Keywords:
PPIrene MonteroAbusos Sexuales
Your comment has been forwarded to the administrator for approval.×
Warning! Will constitute a criminal offense, illegal, threatening, offensive, insulting and swearing, derogatory, defamatory, vulgar, pornographic, indecent, personality rights, damaging or similar nature in the nature of all kinds of financial content, legal, criminal and administrative responsibility for the content of the sender member / members are belong.
Related News