They ask that they send Parliament a detailed report on the degree of compliance. 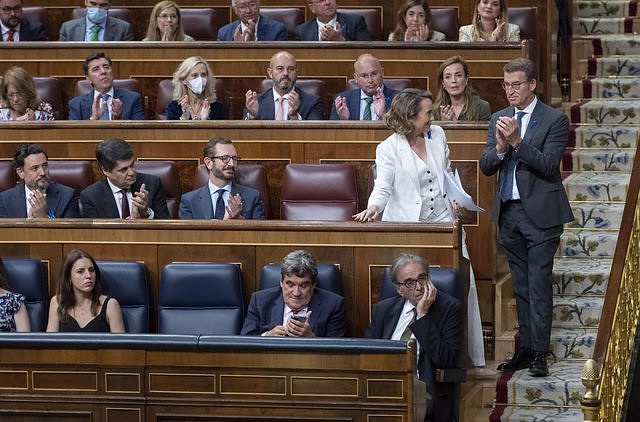 The Popular Parliamentary Group has registered in Congress a Proposal not of Law in which it requires the Government to comply before the end of the year with all the resolution proposals approved in the Debate on the State of the Nation, which was held on the 12th, July 13 and 14, and not just yours.

With this initiative, which is signed by the popular spokesperson, Cuca Gamarra, and by the general secretary of the GPP, Caros Rojas, the Popular Group demands that the Executive send, at the beginning of the next period of sessions, a detailed report on the degree of compliance and the actions launched in relation to the 41 resolution proposals approved in said Plenary.

The conclusions approved in this general policy debate "must be considered as authentic mandates that the representatives of national sovereignty impose on the Government". "Out of respect for the separation of powers on which our democratic system is based, they must be mandates that the executive power must comply with and subsequently be accountable for their execution," they stressed.

In this sense, they allude to the initiatives approved at the proposal of their parliamentary group. In health matters, the one related to a human resources plan aimed at health professionals and that reinforces, to a greater extent, primary care and other measures.

In terms of foreign policy and State security, the one referring to "recovering and strengthening the permanent axes in the issues of neighborhood, EU and Latin America; to strengthen the relationship with the US and support the expansion of the military contingent for the Rota base; to promote a defense budget increase to achieve the objective of 2% of GDP; to improve the working conditions of all the professional personnel of the Armed Forces and other reforms related to the role of Spain in the EU".

Similarly, they call on the Government to implement its resolution on developing "the necessary regulations to adapt to Spanish legislation the recommendations approved by the European Parliament regarding ETA crimes and to reinforce prevention, international cooperation and persecution policies. against jihadist terrorism; actions to intensify the recognition of the victims of terrorism as an ethical benchmark of our democracy and to promote a democratic culture that vindicates the Transition, the Constitution and the rejection of all totalitarianism".

Fourth, it requests the Government to materialize its proposal regarding "the immediate recovery of all rail services to pre-pandemic levels and the actions carried out to withdraw the concession map for regular bus passenger transport and proposals to the elaboration of a new map that does not harm depopulated Spain".

‹ ›
Keywords:
Debate Estado De La NaciónPP
Your comment has been forwarded to the administrator for approval.×
Warning! Will constitute a criminal offense, illegal, threatening, offensive, insulting and swearing, derogatory, defamatory, vulgar, pornographic, indecent, personality rights, damaging or similar nature in the nature of all kinds of financial content, legal, criminal and administrative responsibility for the content of the sender member / members are belong.
Related News