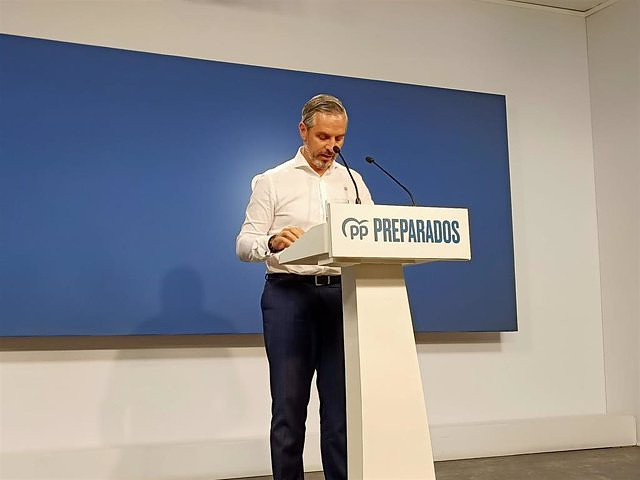 The PP's deputy secretary of Economy, Juan Bravo, has assured that the party has a "unique" position on the Government's energy plan after the refusal of the president of the Community of Madrid, Isabel Díaz Ayuso, to implement the measures. In addition, he has emphasized that there are also "discordant" voices in the PSOE and in Esukadi who reject that it is "by imposition".

In an interview on Radio Nacional, which Europa Press has picked up, the 'popular' leader has pointed out that on the stage of the autonomous communities the Basque Country "does not share" the Executive's plan, as well as the president of the Spanish Federation of Municipalities and Provinces (FEMP), Abel Caballero. "You don't have to focus on the PP, but there are more people or more parties, even their own, that don't see it the same way," he asserted.

He has also pointed out that he does not find "so many differences" with the position of the Basque Government because "the PNV has raised the scope of competence and that certain measures are not going to be applied in its territory," he assured. "There are discordant voices, if they want to focus on the PP, then perfect, but we have all said that we want the measures not to be imposed," added Bravo.

In this sense, he maintains that the main criticism made by the PP is "doing it unilaterally" and has defended that the formula for reaching an agreement could be different. "It can be from the ministries that take the energy part together with the Ministry", he has proposed, at the same time that he has stressed that these types of measures have to be done in a "consensual" manner.

Bravo has denied that there is a "discussion" on the issue of energy efficiency and has pointed out that the problem is why "as opposed to making positive stimuli" such as aid from European funds to promote this saving "it has to be the contrary" and, in addition, announce sanctions.

"We understand that there is another way of doing things (...) We have to have the capacity to respond with logical and consensual responses, if possible," he added.

Next, he has warned the Government that it cannot use "this curtain of the energy field to not talk about other things" such as the economic situation in general because "there is an important scenario so that it is not worked on" after the last unemployment data.

Asked if they fear that the censorship of Ayuso's "selfishness" will be used to wear Feijóo down, Bravo pointed out that if they talk about the substance "there are more who think the same" as the regional president, but if they talk about the person perhaps "Sanchez is looking for a conflict again". "I think they are wrong because the people of Madrid have already decided on what they want, as well as the Galicians or the Andalusians," he added.

‹ ›
Keywords:
PSOEEficiencia EnergéticaPPDíaz Ayuso
Your comment has been forwarded to the administrator for approval.×
Warning! Will constitute a criminal offense, illegal, threatening, offensive, insulting and swearing, derogatory, defamatory, vulgar, pornographic, indecent, personality rights, damaging or similar nature in the nature of all kinds of financial content, legal, criminal and administrative responsibility for the content of the sender member / members are belong.
Related News