Remember that countries like Portugal do not have a Wealth Tax and ask the Executive for a "single voice" after Escrivá's words. 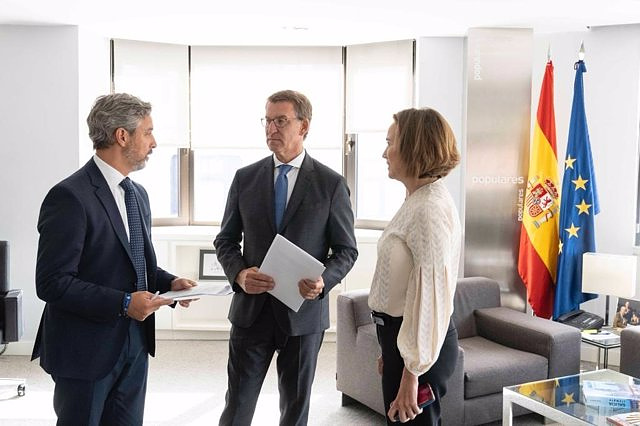 The Deputy Secretary of Economy of the PP, Juan Bravo, has responded to the Executive this Wednesday that eliminating taxes such as Patrimony "does not go to the left or right" because leftist governments such as Portugal removed that tax and has "recovered its economy". In addition, he has rejected that the president of the Andalusian Government, Juanma Moreno, seeks to "confront" with other Autonomous Communities with his tax reduction, although she has admitted that "competing is good" because it helps all Spaniards.

Bravo has stated that if more taxpayers go to Andalusia, 50% of that collection will go to Spain as a whole, so "it is good for Andalusia and for Spain". "You don't have to see it as confrontation, this is not to confront, this is to win as a country", he has abounded.

In the face of criticism from Vice President Nadia Calviño, assuring that it is a "joke" to lower "taxes on the rich" after Moreno's announcement, she has stated that what is a "joke" is that a member of the Government does that type of statements because, as he has said, "he forgets" that the Andalusian president has also announced that he will deflate the personal income tax rate, a measure that the Government of Pedro Sánchez "does not want to do" but the PSOE "has supported in the country Basque".

In an interview on Antena 3, which Europa Press has picked up, Bravo has criticized the Government's response to Moreno's tax reduction and has highlighted that in recent months they have been dedicated to first "disparaging" the PP measures but then "applying them" as, in his opinion, has happened with the lowering of VAT on gas and electricity.

"What they would have to do is focus, have a single voice in the government and not have a minister come out and then the others disavow them," he emphasized, alluding to the statements by Minister José Luis Escrivá about centralizing taxes. According to Bravo, the Government should first "internally" agree on what they are for and against. "We humbly do not mess with anyone," he added.

Bravo has stressed that in Europe as a whole there is no wealth tax "it does not exist or is practically testimonial somewhere". "What does not exist in any country in Europe is the tax on inheritance and wealth at the same time", he emphasized.

He has also emphasized that there are people from other countries who, with the teleworking that has been promoted in the pandemic, have moved to Andalusia and with this step it is intended to "attract them as residents" to "increase collection".

After ensuring that it is about attracting "more talent, investment and capacity", he recalled that Andalusia managed to attract more than 200,000 new taxpayers by suppressing successions and donations. In his view, in the end "it is shown" that by lowering taxes "you earn more" but the government's "solution" is to "intervene and more taxes" when the country "is not doing well."

The person in charge of Economy of the PP has also underlined that Portugal has a "government of the left and there is no wealth tax". According to him, he added, that country is a "clear" example that "it has lowered taxes and has recovered its economy", with which "this is not about the left or the right but about bad management or good management".

"What surely is never an answer to situations is more interventionism and more taxes. That never works out," he emphasized, to be convinced that with the elimination of Patrimony, Moreno will collect more than the 100 million that was what got for that tax.

When asked if Moreno with this descent from Moreno can go to war not only with Catalonia but also with Madrid, Bravo has stated that "this is not a matter of war" but rather "a country project".

Thus, he has said that what they should try as a country is to establish "attractive taxation" to attract more citizens from other countries, especially taking advantage of teleworking, so that in Spain they have a regime "as similar to their countries" of source. "This is not about confrontation. Some see everything as confrontation", she has stated, although she has said that "competing is good" because that "improves everyone".

Given the fact that Madrid defends deflation for all incomes but Andalusia proposes it only for those of less than 40,000 euros, Bravo has indicated that they believe in the "competence of each community", so that each autonomy "according to its resources can aspire to the maximum.

"The ideal would be everyone. The priority would be the medium and low incomes," said the leader of the PP, who believes that at this time in Spain there is "margin" to deflate the income of families.

‹ ›
Keywords:
Junta De AndalucíaPPJuanma Moreno
Your comment has been forwarded to the administrator for approval.×
Warning! Will constitute a criminal offense, illegal, threatening, offensive, insulting and swearing, derogatory, defamatory, vulgar, pornographic, indecent, personality rights, damaging or similar nature in the nature of all kinds of financial content, legal, criminal and administrative responsibility for the content of the sender member / members are belong.
Related News