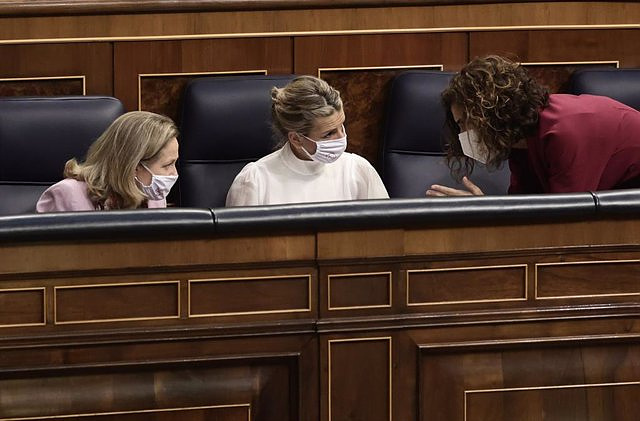 The new temporary taxes on the extraordinary profits of the large energy companies and financial entities promoted by the Government face their first examination this Tuesday in the Plenary Session of Congress, which must decide on the admission to processing of the bill registered by the PSOE and United We Can.

The new taxes were announced by the President of the Government, Pedro Sánchez, during his speech at the Debate on the State of the Nation as part of the economic plan to deal with the costs derived from the energy and price crisis, derived from the Russian invasion of Ukraine.

Days later, PSOE and United We Can registered the initiative, in which they propose a temporary tax of 4.8% on the interest margin and net commissions of financial entities with revenues of more than 800 million euros, and 1.2 % of total sales of energy companies that invoice more than 1,000 million euros per year.

The new tax on the energy sector will be in force during 2023 and 2024 and will seek to collect 2,000 million euros a year from the extraordinary profits of these companies in 2022 and 2023.

On its side, the "exceptional and temporary" tax aimed at "the large financial entities that have already begun to benefit from the rise in interest rates", as the Government has argued, will last for two years -on the exercises 2022 and 2023-- and will seek to raise 1.5 billion each year.

On the possibility that companies transfer the cost of the tax to customers, the Government has established in the proposal a penalty of 150% of the amount that is transferred to the user.

The National Markets and Competition Commission (CNMC) would be the body in charge of ensuring that the tax is not passed on to customers in the case of energy companies; for banks, the CNMC must collaborate with the Bank of Spain.

With regard to the electricity, gas and oil sector, the benefit is set at 1.2% of its turnover, which makes it possible for the contributions of each group to respond to its market share.

On the other hand, the general rule is that economic groups that hold the status of main operators, defined in accordance with tax regulations, are subject to the provision, which exclusively includes the Spanish companies of the group, not being subject to tax, therefore, the turnover obtained by these groups through subsidiaries in other countries.

In the case of credit institutions, the benefit is set at 4.8% of their interest margin --interest collected less paid-- plus their net commissions --collected less paid. According to the proposal, these are items that allow maintaining "due proportionality" in the contributions of each business group according to their market share.

As is the case with energy companies, tax groups are subject to the benefit as a general rule, leaving out the interest and commissions obtained by their subsidiaries in the sector.

"In the credit institution sector, it is important to know the weight that the levy implies with respect to its main magnitudes. Thus, the estimated annual impact of the levy barely represents 0.06% of the value of the assets of large credit institutions Spanish", maintain PSOE and United We Can in the proposal.

‹ ›
Keywords:
AEATElectricidadPSOEPodemosMinisterio De HaciendaSector FinancieroCongreso De Los Diputados
Your comment has been forwarded to the administrator for approval.×
Warning! Will constitute a criminal offense, illegal, threatening, offensive, insulting and swearing, derogatory, defamatory, vulgar, pornographic, indecent, personality rights, damaging or similar nature in the nature of all kinds of financial content, legal, criminal and administrative responsibility for the content of the sender member / members are belong.
Related News