The new League F starts with uncertainty, without its great star and with Barça's favoritism 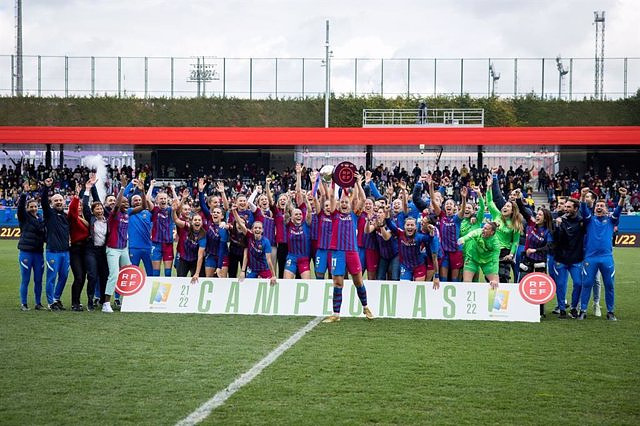 The F League, the First Division of women's football that debuts its professional status, will start this weekend with unquestionable favoritism from FC Barcelona, ​​champion of the last three editions, with some uncertainty due to the lack of agreements between the Professional Football League Women (LPFF) and the Royal Spanish Football Federation (RFEF), and with the notable absence of its maximum reference, Alexia Putellas.

After it was announced in the spring of 2021, women's football can finally boast of being the fourth Spanish sports competition with the professional label after the First and Second Divisions of football, and the Endesa Basketball League. A start full of turbulence due to the conflict between the employers and the federation, whose last point has been the threat of planting the arbitration group for the first weekend of competition in protest at their employment situation.

The Higher Sports Council (CSD) has had to act as a mediator, although, with less than 24 hours to go before the official start of the championship, there was only the promise of working to improve these conditions for some collegiate members, who also want to give that well deserved professional leap.

The LPFF has already warned with "legal actions" if they do not show up for the eight games and confirmed that all the teams would show up for an F League that will be much more accessible to the public on television thanks to the bet it has made for it the sports streaming platform 'DAZN', with several free matches on its 'YouTube' channel.

In sports, FC Barcelona will start once again as the great favorite to add their fourth consecutive title despite the fact that they will not be able to count on their great star, Alexia Putellas, except for surprise throughout the season.

The Catalan midfielder, current 'Ballon d'Or', seriously injured her knee before England's European debut and could be out for a year. A sensible loss of the great current reference of Spanish women's football and that, although it has indisputable quality, should not reduce too much the current gap of the Blaugranas with the rest of the teams.

In fact, last season, in which they did not lose any games, they were 24 points ahead of Real Sociedad, one less than in 20-21 against Real Madrid, a distance that at least hopes to be somewhat less so that there is something more of emotion.

There are also other key pieces like Jenni Hermoso, Lieke Martens or Leila Ouahabi, but Jonatan Giráldez still maintains the block with which he only missed the Champions League last year, where he reached the final, with other figures like Irene Paredes, Mapi León, Patri Guijarro, Aitana Bonmatí, Caroline Graham Hansen, Asisat Oshoala or the young Claudia, and also the club has moved very well in the market.

Thus, two key players have arrived from the English team that was proclaimed continental champion in July, such as the experienced defender Lucy Bronze and the midfielder Keira Walsh. The young Salma Paralluelo, the winger Nuria Rábano and the return after loan of Laia Codina have also arrived to strengthen Barça even more.

With the aim of trying to be as competitive as possible and reduce the distance with the Catalan team, there will be a trio of teams that will also be the ones that in theory will fight for their particular trophy, qualification for the Champions League.

Real Sociedad will try to return to the level of last season in which they were proclaimed runner-up and achieved a historic ticket to try to be in the group stage of the continental competition. For this, he will need both Amaiur Sarriegi and Nerea Eizagirre to offer their great performance.

Real Madrid, runner-up two seasons ago, will seek to regain that position after suffering a lot in the previous one to take third place, partly after signing a bad start that led to the arrival of Alberto Toril on the bench, who improved notably to a team that has been reinforced in several positions, especially with the signing of the Scottish Caroline Weir.

In any case, the madridistas have lost two important players such as the Swedish Kosovare Asllani and Marta Cardona, although she did not play much last season and has set course for an Atlético de Madrid that has moved a lot in the transfer market, although It does not have important players like Deyna Castellanos, Laia Aleixandri, Amanda Sampedro and Silvia Meseguer. In addition to the Aragonese, the also international Irene Guerrero, Eva Navarro, Ainhoa ​​Moraza or the U-20 world champion Andrea Medina reinforce the rojiblancas, along with the 'return' of Virginia Torrecilla.

This trio will try to approach the UDG Tenerife, who had a great last season in which they were fifth and fought until the final days for the Champions League, Athletic Club, who has lost Moraza and his scorer Lucía García, signed by Manchester United , and a Seville that will have more experience with Sampedro and Meseguer.

The rest will also try to continue growing in a year that is promising for national women's football in a competition that will have Alhama CF and Levante Las Planas as new tenants, who will fight to avoid the two relegation places.

‹ ›
Keywords:
Fútbol Club BarcelonaMujer Y Deporte
Your comment has been forwarded to the administrator for approval.×
Warning! Will constitute a criminal offense, illegal, threatening, offensive, insulting and swearing, derogatory, defamatory, vulgar, pornographic, indecent, personality rights, damaging or similar nature in the nature of all kinds of financial content, legal, criminal and administrative responsibility for the content of the sender member / members are belong.
Related News