Albares will have to defend the project before the amendments of PNV and Vox, who ask to return it to the Government. 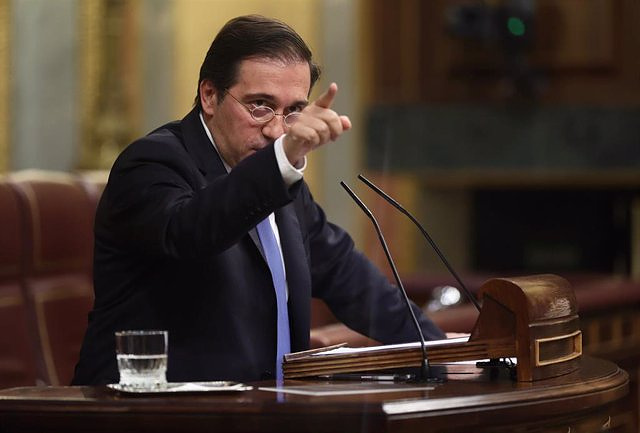 Albares will have to defend the project before the amendments of PNV and Vox, who ask to return it to the Government

The new International Cooperation Law will pass its first parliamentary procedure next Thursday, with the debate in the Plenary Session of the Congress of Deputies of the amendments to the totality presented by the PNV and Vox.

The Minister of Foreign Affairs, European Union and Cooperation will be in charge of defending the project drawn up by the Government, which gave the green light to the text at the end of May and sent it to Parliament for approval.

The new Law of Cooperation for Sustainable Development and Global Solidarity is called to succeed the Law of International Cooperation of 1998 and, among other things, establishes by law to allocate 0.7% of the Gross National Income (GNI) to Aid Development Official (ODA) and that 10% of this be allocated to humanitarian action.

Both Albares and the Secretary of State for International Cooperation, Pilar Cancela, have expressed the Government's wish that the future law attract the greatest possible consensus, as has already happened with the previous one. However, both PNV and Vox presented amendments at the end of June demanding that the text be returned to the Government.

The plenary will now have to decide whether to accept or reject these amendments. The forecast is that they lie down and the text can continue its journey with the presentation of amendments from the groups and their discussion in a presentation and commission, to later be sent to the Senate.

In its amendment, collected by Europa Press, the PNV, a regular partner of the Government, denounces that the bill "clearly and radically alters the current regulatory framework for development cooperation activity, proposing a radical centralization of its regulation" , claiming the role of cooperation carried out by the autonomous communities.

Specifically, it disfigures the Government that "disregards powers expressly recognized in favor of the autonomous communities in their statutes of autonomy, powers deployed to date without such action having raised any controversy."

Likewise, it maintains that "the terms in which the bill establishes the content of the coordination" between the central government and the autonomous communities, deprives the latter "of their competence to establish and execute their own humanitarian aid policies, turning them into simple executors of state policy".

Those of Aitor Esteban consider that "it violates the terms that the Constitutional Court has attributed to the State in terms of its coordinating role in the field of foreign policy and determine the programming, management, monitoring and coordination mechanisms, as well as operational procedures" .

In the case of Vox, the request is the same but the argument is different. Those of Santiago Abascal complain that the future law "breaks with the sovereignty of the Spanish State by subordinating itself to what is established by a kind of world government that no Spaniard has voted for", in reference to the 2030 Agenda and the Sustainable Development Goals ( SDG).

Likewise, Vox denounces that "the entire legislative initiative presents a strong ideologization" and that the Government seeks to "introduce into national legislation ideological notions unknown by our legal system", referring again to the 2030 Agenda and the SDGs that also, it recalls, they are not legally binding.

On the other hand, those of Abascal reproach the Government for dedicating more attention to ideological issues that "should not have a place" and on the other hand, legislative developments are left for later, giving a period of six months for the presentation, among others, the substitution of the Spanish Development Fund (FONPRODE) by the new Spanish Fund for Sustainable Development (FEDES).

They also disfigure the "excessive ambition" of the text, recalling that in its previous opinion on it, the Council of State warned that a law of this type "does not have the capacity to indefinitely condition the General State Budget laws", in apparent allusion to the 0.7% target.

"Far from solving some of the problems of Spanish Cooperation, by not solving them in the text itself, it leaves them at the mercy of future and hypothetical regulatory developments", concludes Vox, insisting that it is "an empty law in what the itself is declared fundamental", which is why it asks for its return to the Government.

‹ ›
Keywords:
PNVCongreso De Los DiputadosVOX
Your comment has been forwarded to the administrator for approval.×
Warning! Will constitute a criminal offense, illegal, threatening, offensive, insulting and swearing, derogatory, defamatory, vulgar, pornographic, indecent, personality rights, damaging or similar nature in the nature of all kinds of financial content, legal, criminal and administrative responsibility for the content of the sender member / members are belong.
Related News