Requires the Council of Ministers to declassify documents declared secret or reserved. 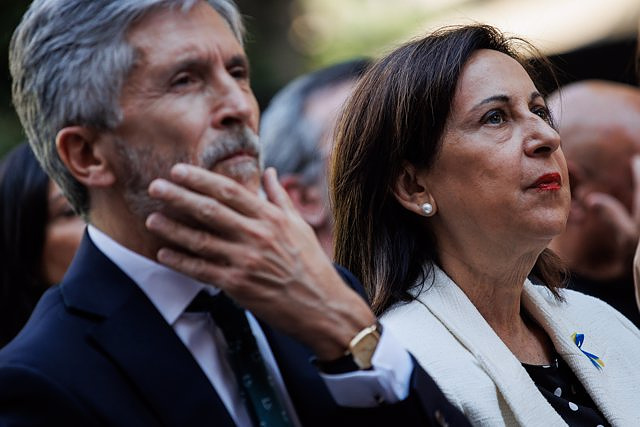 The judge of the National High Court investigating the 'Pegasus case', José Luis Calama, has agreed to the declaration as witnesses of both the Minister of the Interior, Fernando Grande-Marlaska, and the Minister of Defence, Margarita Robles.

In an informative note, it is also indicated that the head of the Central Court of Instruction number 4 agrees to send a request to the Council of Ministers in order to proceed to declassify the matters, acts, documents, information, data and objects, declared secret or reserved and that could be affected by said testimonies.

The National Court points out in the statement that Calama agrees to these proceedings in view of the content of the testimonial statements of the former director of the CNI Paz Esteban, of the official of this body number 7613 - who signed the preliminary reports attached to the complaints of the Lawyer of the State-- and the Minister of the Presidency, Relations with the Courts and Democratic Memory, Félix Bolaños.

Judge Calama began to investigate on April 26, pointing to possible crimes of discovery and disclosure of secrets, after the complaint filed by the State Attorney for the infection of the cell phones of the President of the Government and the Minister of Defense, a complaint that It was later expanded after the intrusion into Grande-Marlaska's phone was also confirmed.

In that first resolution, the instructor provided details on the initial complaint filed by the State Attorney's Office, according to which, after the analysis of the mobile devices of the chief executive and the head of defense carried out by the CERT on April 30, "It has been known that they were the object of several infections by the Pegasus tool, mobile device spy 'software', between the months of May and June 2021".

The reports of the National Cryptologic Center on the cell phones of Sánchez and Robles highlighted that "the mobile device of the President of the Government analyzed was infected by Pegasus on two occasions (on May 19, 2021 and May 31, 2021)", while Robles would have been infected in June of that year.

In both cases, Calama collected, the reports stated that "information exfiltration occurred", but currently neither of the two phones present "known indicators of ongoing Pegasus infection".

IN THE CRISIS WITH MOROCCO

The first of the intrusions in Sánchez's mobile would have occurred in the context of the massive entry of some 10,000 immigrants into Ceuta between May 17 and 18, 2021, which precisely led Sánchez to visit the autonomous city on this second day, as well like Melilla, with the Minister of the Interior.

In addition, on May 18 it was when Morocco called its ambassador in Madrid, Karima Benyaicha, for consultations, the one who had been summoned in Foreign Affairs to protest the events in Ceuta. On the same day, the 19th, Sánchez was in a session to control the Government in the Congress of Deputies.

The second would have taken place when the President of the Government was with the Prime Minister of Poland, Mateusz Morawiecki, in Alcalá de Henares on the occasion of the XIII Spanish-Polish Summit. That day, Morocco published a statement in which it indicated that the diplomatic crisis was motivated by the government's position regarding the Sahara, not by the reception of the leader of the Polisario Front, Brahim Ghali.

Precisely, the latter declared on June 1, 2021 as accused before Judge Santiago Pedraz for the complaint filed by the Saharawi Association for the Defense of Human Rights (ASADEH) for genocide and hours later he flew back to Algeria.

As for the mobile phone of the Minister of the Interior, the Government reported after Grande-Marlaska suffered two attacks in the same June 2021. In the first of them 4 megabytes were stolen and in the second a much larger volume of information , 6.3 gigabytes.

The analysis of the terminals of other members of the Government was also able to determine an attempt to infect the phone of the head of Agriculture, Luis Planas, which was unsuccessful, and also occurred in June of last year.

‹ ›
Keywords:
Audiencia NacionalMargarita RoblesMarlaskaCaso Pegasus
Your comment has been forwarded to the administrator for approval.×
Warning! Will constitute a criminal offense, illegal, threatening, offensive, insulting and swearing, derogatory, defamatory, vulgar, pornographic, indecent, personality rights, damaging or similar nature in the nature of all kinds of financial content, legal, criminal and administrative responsibility for the content of the sender member / members are belong.
Related News