Also on the agenda are the statements of several ministers in the 'Pegasus case' and that of Juan Carlos Monedero. 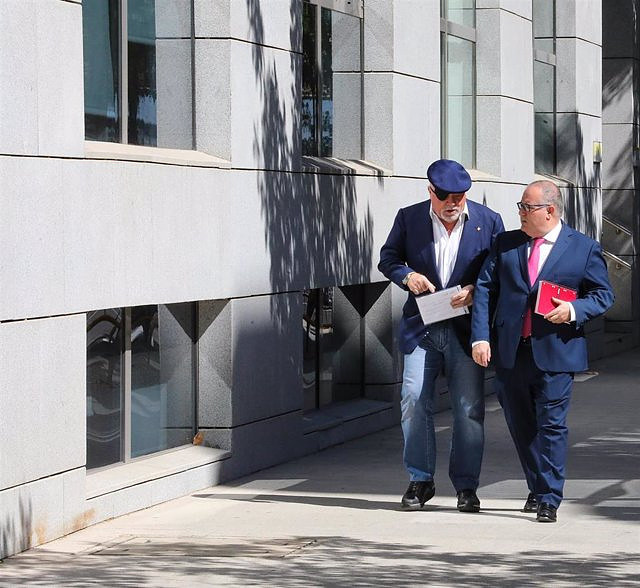 The National Court begins the judicial year pending the last sessions of the trial against the retired commissioner José Manuel Villarejo for three of the pieces of the 'Tandem case' that deal with the particular work of the former high command in the projects 'Iron', 'Land ' and 'Pintor', in which he would have benefited from his police status.

In July, the defenses of some thirty defendants presented their final conclusions; including Villarejo's wife, son and partner, who called for his acquittal. The Prosecutor's Office, for its part, lowered his prison request for the first, from 83 and a half years in prison to five years; for the second, from 14 years to one; and for the third, he kept 70 and a half years in prison.

In the case of Villarejo, the Public Ministry lowered the prison sentence that was initially requested by more than 20 years: from 109 years to 83. On September 5, the commissioner's lawyer will take the floor to present his own conclusions.

The commissioner asked to suspend his presence at the trial after informing the judges that he had suffered a stroke. The president of the court agreed to go ahead with the sessions and allowed the former commander to be absent until September. This August, she was aware of his medical evolution and ordered the National Police to go to the former agent's home to verify that he was there.

The coroner indicated in a first report that "Villarejo has not had a cerebrovascular accident" and that, although he could not examine him -because when he went to his house and could not see him-, he considered that there was no problem in his going to trial.

Villarejo went last Thursday to the National High Court to be examined. Although it is pending that the coroner present his report, the commissioner has already assured that he will be in court on September 5.

On the sidelines, the National Court is pending to respond to the Prosecutor's brief regarding part nine of the 'Punic' plot, in which the alleged existence of a 'box b' in the Madrid PP is investigated.

At the end of July, Anti-Corruption presented a report in which it exempted the former president of the Community of Madrid, Esperanza Aguirre, by not appreciating signs that she was "aware" of the plot. According to the Public Ministry, the fact that she had "absolute control" of the regional PP is "insufficient" to send her to trial.

Thus, Anticorruption asked the judge to exculpate former regional president Ignacio González, despite "the documentary existence" that would suggest that "an electoral crime was committed in the regional elections of 2007." The one who did ask to sit on the bench was the former regional councilor Francisco Granados.

Legal sources have assured Europa Press that the head of the Central Court of Instruction Number 6 is analyzing the text in detail to determine who of those indicated by the Prosecutor's Office should finally be tried. It is expected that this September will be pronounced.

For his part, the judge - also in charge of the 'Lezo case' - must set a date for the interrogation of the former deputy general director of construction of the Directorate of Highways for Development under the government of the PP Luis Manuel Bruno Romero, who allegedly received a series of commissions by OHL managers.

The same magistrate has yet to respond to Podemos' request that the piece 'Kitchen' be incorporated into the piece - the one about the alleged vigilante espionage of the former PP treasurer Luis Bárcenas - the audios of the conversations between the commissioner and the former leader popular Dolores de Cospedal.

The audios to which the formation refers reflect a conversation from 2017 about the 'PISA Report', where the commissioner offers "a topic of the host against Podemos" to the then Minister of Defense -- who replies that she wants it because " it's a bomb"--. The magistrate summoned the Prosecutor's Office to issue a report before resolving.

Likewise, on the agenda of the National Court, the declaration as witnesses of the Minister of Defense, Margarita Robles, and the Minister of the Interior, Fernando Grande-Marlaska, before the head of the Central Court of Instruction Number 4, José Luis Calama.

Robles has already advanced that he would declare in writing, as did the Minister of the Presidency, Félix Bolaños. Defense sources assured Europa Press that the Council of Ministers responded to the judge that there is no secret to declassify in order to question them.

The decision to summon them takes place after the testimonies of the former director of the CNI Paz Esteban, of the official who signed the preliminary reports attached to the complaints of the State Attorney, and of Bolaños himself.

The judge began to investigate in April alleged crimes of discovery and disclosure of secrets after the complaint by the Lawyer for the infection of the cell phones of the President of the Government and the Minister of Defense, a complaint that was expanded after also confirming the intrusion in the phone of Grande-Marlaska.

The declaration of the co-founder of Podemos Juan Carlos Monedero is also planned, but this as an investigator. This after Judge Manuel García Castellón agreed to open a case against him for alleged crimes of money laundering and document falsification related to some transfers between his company and two other companies and the Banco del Alba.

In turn, the National Court is awaiting a response to the Dignity and Justice complaint against 10 ETA leaders for the "expulsion policy" of the terrorist organization in the Basque Country and the murder of former PP councilor Jesús María Pedrosa Urquiza.

On the sidelines, the pieces related to the murders of councilors Miguel Ángel Blanco and Gregorio Ordoñez, as well as Judge Francisco Querol, remain open. In addition, the interrogations of six former ETA chiefs for the attack on the Santa Pola barracks are pending.

The one that does have a date is the former head of ETA Garikoitz Aspizu, alias 'Txeroki', who will be tried on September 13, according to El Correo, after the French authorities handed him over to Spain.

Those who also have a date, but to appear before Judge José Luis Calama, are two experts from the Bank of Spain. Both are summoned for September 14, in order to ratify the reports that they prepared at the request of the magistrate to determine if, at the end of 2015, there was a deficit of provisions by Banco Popular and its "significance" for the accounts Of the entity.

Another dozen cases remain pending proceedings. One of them is the investigation against former judge Fernando Presencia for his statements regarding Supreme Court magistrates. There is also the 'Titella' case, which has producer José Luis Moreno as the main defendant, in which the judge will have to make a move after closing August with more than 70 interrogations.

On the sidelines, it is pending that the European Court of Human Rights (ECHR) rule on the extradition of the former head of the Venezuelan Intelligence Services Hugo 'El Pollo' Carvajal, claimed by the United States.

‹ ›
Keywords:
Audiencia NacionalPolicíaPúnicaComisario Villarejo
Your comment has been forwarded to the administrator for approval.×
Warning! Will constitute a criminal offense, illegal, threatening, offensive, insulting and swearing, derogatory, defamatory, vulgar, pornographic, indecent, personality rights, damaging or similar nature in the nature of all kinds of financial content, legal, criminal and administrative responsibility for the content of the sender member / members are belong.
Related News