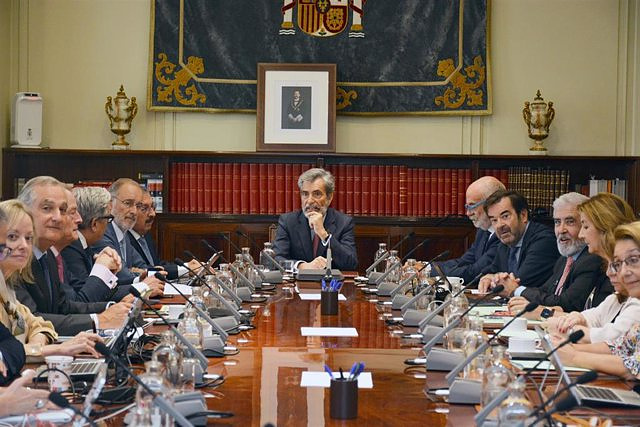 The members of the General Council of the Judiciary (CGPJ) have taken the first step to open the negotiations aimed at appointing their two magistrates of the Constitutional Court (TC) by designating the interlocutors of progressives and conservatives for these contacts, despite which the sources consulted by Europa Press stress that it is unlikely that the September 13 deadline will be met.

On the part of the so-called conservative current, the talks will be led by members José Antonio Ballestero and Carmen Llombart, while Álvaro Cuesta, Rafael Mozo and Roser Bach will be the voice of the progressive wing, according to the aforementioned sources. It is expected that this Monday they will contact each other to establish how the dialogue should develop.

Despite this first step, the sources insist that it is unlikely that an agreement will be reached on the two candidates for the TC within the deadline set by the latest legal reform: September 13.

Time began to run last July, when Congress and the Senate approved a new amendment to the Organic Law of the Judiciary (LOPJ) that gave the CGPJ back its ability to make discretionary appointments in the judicial leadership but only to designate its two candidates. to the court of guarantees, since said reform expressly states that it should be done before this Tuesday.

In this way, the Government, through this parliamentary initiative, amended the first reform of the LOPJ that it carried out in March 2021 with the aim of forcing the renewal of the governing body of the judges, prohibiting the appointment of magistrates for the high courts while he was in office, a situation in which he has been for almost four years.

The need for this 'counter-reform' arose on June 12, when the mandate of four of the twelve magistrates of the TC expired --its president, Pedro González-Trevijano; the vice president, Juan Antonio Xiol; and Antonio Narváez and Santiago Martínez-Vares--, because it is the third that the Constitution commissions the Government and CGPJ to renew.

Faced with the impossibility, due to the first reform, that the Council could fulfill its part, the Executive weighed appointing its two candidates to the TC without waiting for the CGPJ, although the legal sources consulted by this Europa Press cast doubts on the legal possibility of that those nominated by Moncloa can take office without waiting for those of the governing body of the judges.

Although the legal impediment for the CGPJ to fulfill its obligation disappeared with said 'counter-reform', the obstacles to undertake the partial renewal of the TC have now arisen from the Council itself.

As soon as this second reform was approved, the president of the CGPJ, Carlos Lesmes, convened an extraordinary plenary session for September 8, urging the 18 members that currently comprise it to take advantage of this conclave to appoint their duo for the Constitutional.

However, the "disaffection" that Lesmes himself has recognized generated among the members by the Government's decision to enable the Council to make appointments but only for the TC led the so-called conservative bloc to threaten to refuse to make such appointments.

This plan of the 'hard core' would make appointments impossible because the candidates need to add a reinforced majority of three-fifths, that is, twelve votes and at the moment they would only have the eight that the progressive wing brings together, so they would also have to support them four conservatives.

Just a week ago, within the framework of the inauguration of the new attorney general, Lesmes warned that he would not consent to "a CGPJ in absentia" because the nomination of two candidates for the TC is an obligation that the Constitution imposes on the Council.

Just 24 hours later, on Tuesday night, the Conservatives held an internal meeting to set their position. Thus, they decided to "defend institutionality in any case", which implies reaching "duly consensual agreements", sources familiar with the meeting informed Europa Press.

In this way, the two candidates for the TC were opened to agree, although with some conditions: first establish the "rules of the game" - how to proceed for the proposal and the vote - and respect "the Council's decision times".

In the plenary session last Thursday, the conservatives offered this 'modus operandi' to the progressives and they accepted, in a debate that took place with a "good atmosphere" but without any mention of specific names to occupy two of the four seats at stake. in the court of guarantees, according to the sources consulted.

The main point of the protocol illuminated by the CGPJ is that the Plenary will not meet again until there are two selected candidates, although once convened other candidates may apply.

This Plenary Session may be convened by Lesmes on its own initiative or at the request of at least five members and, according to the internal regulations of the CGPJ, it could be convened for September 13, although the aforementioned sources emphasize that it is unlikely.