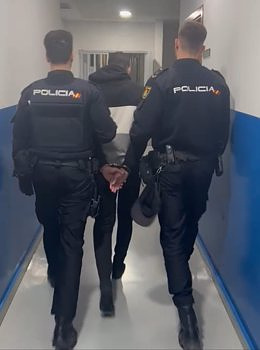 The man arrested for killing a sacristan with a machete outside the church of Nuestra Señora de La Palma in Algeciras (Cádiz) is a man of Moroccan nationality, police sources have informed Europa Press. The National Court has opened an investigation for crimes of terrorism.

The events began after 7:00 p.m. this Wednesday when this man entered the church of San Isidro de Algeciras. Armed with a machete, he has attacked the priest, leaving him badly injured.

As confirmed by the Ministry of the Interior, he has subsequently accessed another church, that of Nuestra Señora de La Palma in which, after causing various damage, he has attacked the sacristan. The sacristan has managed to leave the church but has been hit by the attacker outside, where he has caused fatal injuries.

Moments later, the individual was neutralized and detained, being taken to the National Police premises. The investigation for crimes of terrorism has fallen to the Central Court of Instruction Number 6, which is the one that was on duty, as confirmed by legal sources.

‹ ›
Keywords:
Audiencia NacionalMarruecosTerrorismoAlgecirasPalmaDetenciones
Your comment has been forwarded to the administrator for approval.×
Warning! Will constitute a criminal offense, illegal, threatening, offensive, insulting and swearing, derogatory, defamatory, vulgar, pornographic, indecent, personality rights, damaging or similar nature in the nature of all kinds of financial content, legal, criminal and administrative responsibility for the content of the sender member / members are belong.
Related News