The leader of the Valencian PP denounces a "silent process" by Ximo Puig: "It looks a lot like the pro-independence agenda"

It warns that "there are one hundred rapists in the Valencian Community rubbing their hands" with the reduction of penalties for the 'yes is yes' law. 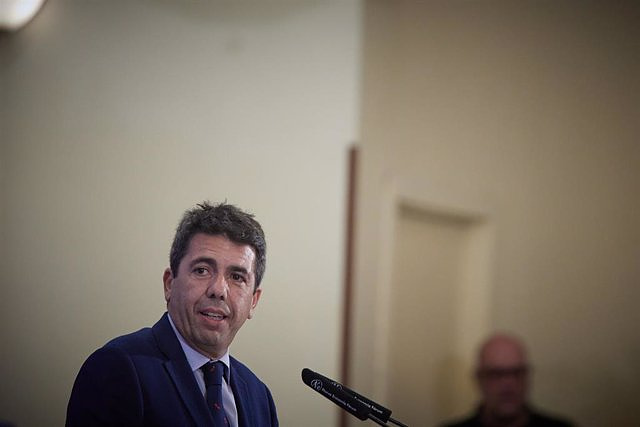 The leader of the PP in the Valencian Community and president of the Alicante Provincial Council, Carlos Mazón, denounced this Monday that the region chaired by Ximo Puig is currently experiencing, from his point of view, a "silent process", with measures that "They are very similar to the Catalan independence agenda."

This is how Mazón explained it during an informative breakfast of the Nueva Economía Forum, where he accused Ximo Puig of having an "import agenda" of the plans of the Catalan independence movement, reproaching him, straight away, for not having come out to reject the repeal of the sedition crime.

In any case, Mazón has given examples of what he understands to be a "silent process", such as "the office of linguistic espionage": "It is a copy of the pro-independence Catalan office and we had to stop it in court and now They have decided to include it in the accompanying law of the Budgets of the Generalitat".

In addition, he has criticized the president of the Generalitat for organizing acts in favor of the "Valencian Country", charging against the PSPV for allowing the Senate to continue using this term in some initiatives.

Regarding the reform of the Penal Code to repeal the crime of sedition, Mazón has reproached Puig for not having aligned himself with the presidents of Aragon and Castilla-La Mancha, Javier Lambán and Emiliano García-Page, when criticizing this measure of Pedro Sanchez.

"Ximo Puig has preferred to be the first of the sanchistas than the first of the Valencians", has criticized Mazón, who has made various criticisms of the Valencian president during his speech in this forum, in which he has indicated that he has two agendas, one of what he wants to do if he reaches the Generalitat and another with what he intends to undo.

In this context, Mazón has criticized Puig for his position in regional financing, the deployment of renewable energies, the application of European funds, tax reform, health in the Valencian Community, Spanish in the classrooms, the alleged irregularities with his brother and the railroad.

It has also ruled on national issues, such as the revision of sentences for the Law on Sexual Freedom, known as the 'only yes is yes' law, warning that "there are about a hundred rapists in the Valencian Community rubbing their hands" with this rule .

Here he has also charged Puig for "having charged nine Gender Violence courts", reproaching him that some women will have to travel more than 70 kilometers to denounce this behavior.

In any case, Mazón has taken advantage of a question about the former mayoress of Valencia, Rita Barberá, of which she has said that everyone has an "outstanding debt" with her, to censor the insults to women, like the one Irene received last week Montero in Congress.

"These are days when there is talk of escraches and insults to women, which we reject at all times, but we reject it all and always. I remember Compromís councilors with cartoon T-shirts whipping Rita (...) In this of It is convenient to have a story about verbal and physical aggressions, this thing about fine or not fine skin, it has to be forever and for everything," he proclaimed.

Another issue that has also come up has been a possible advance of the elections in the Valencian Community, assuring that "people want an advance" because "they want to change things", as the polls show.

However, Mazón has affirmed that he aspires to have a sufficient majority to govern alone, although he has not ruled out reaching agreements with other formations, such as Vox, defending that he has also reached agreements with parties such as Compromís in the budgets of the Provincial Council.

Finally, Mazón has acknowledged that he has made an electoral petition to the former president of the Generalitat Valenciana Alberto Fabra, who has been present at this forum in the city of Madrid, and that he is waiting for his confirmation.

‹ ›
Keywords:
Diputación De AlicantePPXimo Puig
Your comment has been forwarded to the administrator for approval.×
Warning! Will constitute a criminal offense, illegal, threatening, offensive, insulting and swearing, derogatory, defamatory, vulgar, pornographic, indecent, personality rights, damaging or similar nature in the nature of all kinds of financial content, legal, criminal and administrative responsibility for the content of the sender member / members are belong.
Related News