The last season of the Casemiro-Modric-Kroos trinomial? 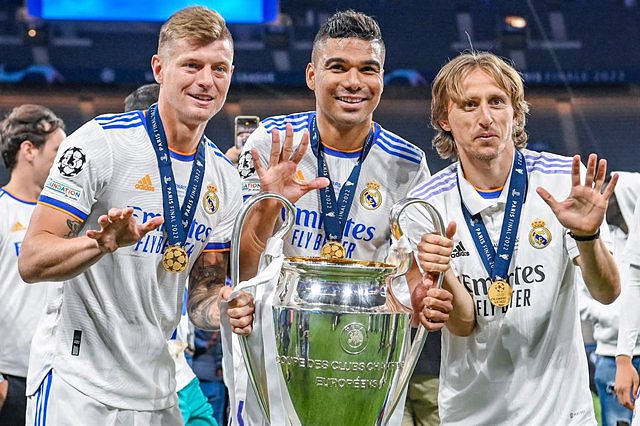 The trinomial formed by Casemiro, Modric and Kroos has marked an era in European football, a trio of midfielders that has given personality and has been the baton in some of the most glorious stages of Real Madrid in the Champions League, since the achievement of the eleventh white European Cup in 2016. Six years with more highs than lows to become a guarantee of reliability, dedication and football, although the age and the arrival of young talents in their demarcations to the Chamartín entity could show a generational replacement.

Thus, the 'CMK' is one of the most iconic signs of identity of this Real Madrid and, however, it could be before his last year at the highest level, putting an end, or perhaps followed, to an indelible legacy for a trivote legendary. Rafa Benítez, in his fleeting stage on the Madrid bench, was the first to bring together the power, talent and quality of these three footballers, beginning to prepare the perfect cocktail to dominate a plot that always seems key when facing the fight for the titles.

Precisely, in addition to technical and football quality, titles are the best visiting card for the three midfielders. Despite the fact that Modric is individually the most successful of the three (20 trophies), the trident has jointly won 15 titles, after the recent achievement of the fourteenth European Cup for Real Madrid last May .

Probably one of the most balanced trinomials in world football, the 'Bermuda Triangle', according to Carlo Ancelotti, thanks to the forcefulness and balance provided by the Brazilian, to sustain the talent, efficiency and brilliance of Modric and Kroos , forming an enviable ensemble in Europe.

Champions of practically everything, their domain would now have the passage of time as its main enemy. Casemiro is 30 years old, Kroos will turn 33 next January and Modric will celebrate 37 in just a month, although of the three he has been the one with the best level in the last two years. Except for the first, which has a contract until 2025, the German and the Croatian, renewed for one year, will end it on June 30.

This presages that the 'CMK' has an expiration date, in addition to how they push the younger replacements. The endorsement of the three is unbeatable, but Eduardo Camavinga, Fede Valverde and Aurelien Tchouameni, a newcomer, want to throw down the door this season. The 24-year-old Uruguayan is already a fixture and a guarantee of success for Ancelotti, who opted for him in the last and most important stretch of the season, starting in the Champions League final in Saint-Denis in May, although for this he had to modify his 4-3-3.

For this reason, his current position and role in the team are not the most favorable, precisely because of the superiority of the 'CMK', which forces the Italian coach to have to place him on the right flank, where he also takes advantage of his speed and powerful driving, two of its main qualities. The Uruguayan is the main contender to usurp a position in Real Madrid's coveted midfield.

It is also postulated as future, although its present is already to be taken into account, Camavinga. A physical wonder who passed, and with flying colors, the test of his first season in a demanding and complicated 'White House'. A 'box to box' midfielder, exercising his superiority in both areas, he stands out for his presence, his good command of the ball and his ability to recover. At just 19 years old, he has played 40 games in the Real Madrid shirt, scoring two goals and dishing out two assists.

In addition, the Frenchman has his good work in the important stages of last season as a guarantee. His performance in the semi-final second leg against Manchester City, coming off the bench, was stellar, giving consistency to a team that only needed to worry about coming back. Work in silence that could bring him closer, little by little, to a position in the starting midfield of Real Madrid, although he will have to control his, at times, excessive impetus.

Tchouameni seems to have more pressure, a player in whom the club has invested great confidence, and who has yet to show if he really can be the natural replacement for Casemiro, a footballer who for the first time has a 'rival' for his position.

The technical quality of the Frenchman, despite his height -almost 1.90 meters- and his physical power are the letter of introduction of a player who should give the Brazilian rest and adapt to a primordial position in the 4-3-3 of Ancelotti, but that will have the added weight of the price, 80 million plus variables, which the current European champion has paid for him.

More muscle, for a future Real Madrid midfielder who seems to be designed for explosiveness, heart-stopping transitions and technical superiority. Thus, Tchouameni, 22, will begin this season a long-distance race for a place in the starting 'eleven', after arriving at the merengue team after playing 95 games with Monaco, although the club are optimistic after the preseason, of less to more of the player, willing to be level competition for Casemiro.

And neither can Dani Ceballos be ruled out yet, a player to the liking of Carlo Ancelotti, who recognized that the Sevillian deserved more playing time. The player, who could be transferred to make 'cash', is a footballer of undoubted talent, with a lot of character and with specific conditions perhaps closer to what Modric gives. He has left very good feelings on the tour of the United States and his biggest obstacle may be the competition and the high level in that part of the field.