The large cogeneration industry will be able to benefit from the gas cap temporarily, announces Sánchez

The Government processes a ministerial order to increase the regulated remuneration of cogeneration by more than 1,000 million. 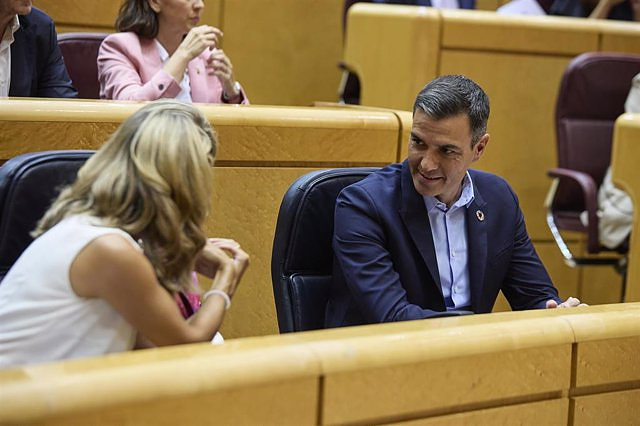 The Government processes a ministerial order to increase the regulated remuneration of cogeneration by more than 1,000 million

The President of the Government, Pedro Sánchez, announced this Tuesday in the plenary session of the Senate that the large industry that uses cogeneration will be temporarily covered by the gas cap compensation mechanism, known as the 'Iberian exception'.

In his speech in the Upper House to give an account of the measures to face the energy and price crisis, as well as the saving and efficiency measures, Sánchez has advanced that the Government will approve "an exception for the cogeneration installations of the industries with high gas consumption, allowing them to be temporarily covered by the Iberian mechanism".

The president explained that it is a measure that the industry itself has requested and that it will benefit sectors such as ceramics, brick, chemicals, paper, textiles or fertilizers, all of them covering up to 20% of industrial GDP national.

Industries that, he stated, "will be able to continue operating and guaranteeing employment throughout the territory." In total, Sánchez said, the measures approved to assist the industry reach 850 million euros, including tax cuts, tolls, direct aid, or increased compensation for the cost of CO2 emission rights.

According to sources from the Executive, the Government is processing a ministerial order to increase the regulated remuneration of the cogeneration industry by more than 1,000 million euros. In 2021, the regulated remuneration of this industry, which traditionally contributes 10% of electricity generation in Spain from the heat generated in its industrial processes, was 665 million.

However, the increase in gas costs has forced many of these facilities to stop, with a drop in electricity production through cogeneration of more than 60%.

In addition to allowing the continuity of industries and the maintenance of jobs, the Government justifies this measure to increase gas savings, since a cogeneration plant produces heat and electricity more efficiently than if heat were generated on the one hand and electricity for another.

According to the calculations presented by the Government, the energy savings achieved by cogeneration are around 10% and the return to operation of the currently stopped cogeneration plants could provide savings of up to 1.2% of the daily demand for gas in the best scenario.

‹ ›
Keywords:
SenadoPedro SánchezElectricidadMinisterio De Industria
Your comment has been forwarded to the administrator for approval.×
Warning! Will constitute a criminal offense, illegal, threatening, offensive, insulting and swearing, derogatory, defamatory, vulgar, pornographic, indecent, personality rights, damaging or similar nature in the nature of all kinds of financial content, legal, criminal and administrative responsibility for the content of the sender member / members are belong.
Related News