The K4 500 of Craviotto, Cooper, Arévalo and Germade is proclaimed world champion 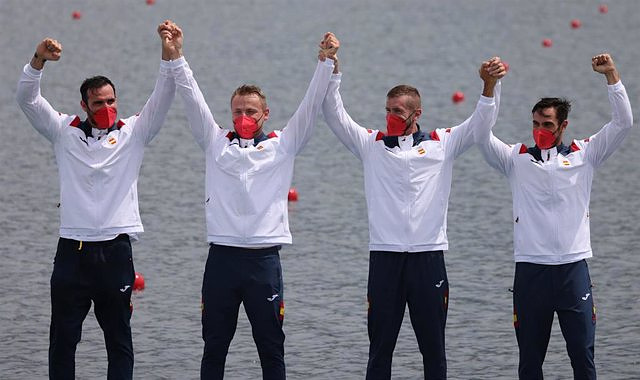 The Spanish men's K4, made up of paddlers Saúl Craviotto, Marcus Cooper Walz, Carlos Arévalo and Rodrigo Germade, won the gold medal this Saturday in the 500-meter event on the third day of the Olympic Sprint World Championship, which will be is contesting at Banook Lake in Halifax (Canada).

The Spanish boat, silver in the Tokyo 2020 Olympic Games, improved the second place in the 2019 World Cup and was finally able to beat its 'black beast', Germany, which deprived it of glory in those two international events, to get the first medal for the Spanish delegation in North American lands.

With Arévalo and Cooper exchanging their positions with respect to those championships, Spain came second halfway through the race and came back from the boat made up of Tom Liebscher, Max Rendschmidt, Max Lemke and Jacob Schopf to cross the finish line in a time of 1:20.83, one second ahead of his rival. Ukraine, champion in 2021, was third.

Meanwhile, the female K4, made up of the Olympic silver medalist Teresa Portela, Sara Ouzande, Carolina García and Laia Pelachs, was only 0.03 off the podium and was fourth in the 500-meter test.