Almost all the ministers defend staying and Puigdemont and Borràs leaving while Turull avoids positioning himself. 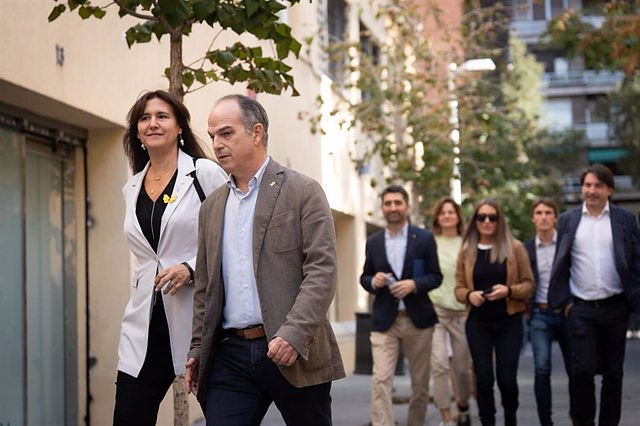 The 6,465 members of Junts -with more than six months of seniority- will be able to vote electronically from midnight on Thursday and until 5:00 p.m. on Friday if they want the party to continue to be part of the Govern de Pere Aragonès or not in an internal consultation.

"Do you want Junts to continue being part of the Government of Catalonia?" Is the question that will be put to the foundations of the formation, who are facing a vote that could trigger the breakup of the Catalan Executive and that could have consequences within the party chaired by Laura Borràs and whose general secretary is Jordi Turull.

The question is preceded by an introduction that recalls that the audit they carried out on the Government's action showed that there were "non-compliances of central elements" and that, consequently, the party has presented a series of proposals to guarantee compliance with the legislature agreement that, until now, ERC has not accepted.

Since Monday, when the question was made public, leaders, deputies and territorial cadres of the formation have openly made their position public, starting with the former president of the Generalitat Carles Puigdemont, who this Wednesday, has been in favor of leaving the Govern .

They have also expressed their desire to leave the Catalan Executive Borràs; three of the four Junts vice-presidents --Josep Rius, Francesc de Dalmases and Aurora Madaula--; the Minister of Research and Universities, Gemma Geis; the former vice-president of the Government Jordi Puigneró; the president of Together in Parliament, Albert Batet; the Secretary of Organization, David Torrents; MEP Toni Comín; the mayor of Girona, Marta Madrenas, and the deputies Jaume Alonso-Cuevillas and Joan Canadell.

On the contrary, councilors Jaume Giró, Victòria Alsina, Lourdes Ciuró and Violant Cervera want to stay in the Government; the ex-secretary general of the party, Jordi Sànchez; former councilors Josep Rull, Quim Forn and Damià Calvet -- who is the president of the Port of Barcelona --; the ex-mayor Xavier Trias, and the deputy and deputy general secretary of Junts, David Saldoni.

Although Turull assured that he would make his vote public for the militancy, he has finally avoided positioning himself by appealing to the neutrality that, in his opinion, the Electoral Syndicate of the consultation has requested.

This Wednesday, the Electoral Syndicate has issued two communiqués: first one that asked internal positions, collegiate bodies and institutional representatives to remain neutral and refrain from using their position "to favor any of the options of the consultation", while that in the second he has clarified that personal positions are allowed but not accompanied by official party symbols.

In addition to Turull, the mayor of Vic (Barcelona) and vice president of the party, Anna Erra, the leader of Junts in Congress, Míriam Nogueras, and the spokeswoman in Parliament, have not spoken less than a day before the voting begins, Monica Sales.

The provisional results of the consultation will be known on Friday afternoon, that same afternoon the Executive of the party is scheduled to meet, and on Saturday they will give the final results.

In the event that the 'yes' vote wins to continue in the Government, the vote may lead the party to a crisis and a possible split, as some Junts leaders consulted by Europa Press privately admit.

And it is that Borràs and his associates bet on the opposite option and this can generate a clash with those in favor of remaining in the Catalan Executive, whose consequences are unknown.

One of the possibilities that has been considered is that Borràs and his associates would leave the party to lead the civic list that the ANC wants to promote for the next Catalan elections, a possibility that the president of Junts has always denied.

Another of the unknowns is what would happen to the minister Gemma Geis, taking into account that she is in favor of leaving the Government, and how the president of the Generalitat, Pere Aragonès, will proceed in this regard, beyond the fact that his name also sounds to lead the list of Junts to the Mayor's Office of Girona, where they have been left without a candidate.

In the event that the 'no' is imposed, which would force Junts to leave the Government, it would be necessary to wait for the ministers to present their resignation and for Aragonès to sign his resignation and proceed with a remodeling of the Catalan Executive with ERC ministers.

And furthermore, the possible victory of those in favor of leaving the Government may have consequences on those who have defended staying.

Awaiting the result of the consultation that will define his mandate at the head of the Government, the president of the Generalitat, Pere Aragonès, has reiterated in recent days that he respects the internal process of Junts and believes that now is the moment that his partner in the Executive decides.

On several occasions, Aragonès has expressed his wish that Junts continue in the Government, although he has warned that, if they remain in the coalition, they will have to be loyal to avoid a new crisis in the future: "It would not do any good to agreement that means that after 15 days we will be the same again", he stated this Wednesday in Parliament.

To do this, he has shown his willingness to reach an agreement on the demands that Junts makes if they finally stay in the Executive: "If this is the decision, which I hope will be the case, getting 100% involved in the Government, not just the ministers, as well as the political formations that support it. Without a doubt, with all the desire for co-responsibility, mutual respect and maximum institutional loyalty that we can never lose".

From the Palau de la Generalitat they prefer not to advance scenarios and wait to see what the outcome of the Junts consultation is, but the Government spokeswoman, Patrícia Plaja, acknowledged on Tuesday that they cannot "improvise" and that they are prepared for any scenario, even that of a solo ERC government.

In fact, that of a Government alone is an option that the Republicans already began to slide during the electoral campaign of February 14 and Aragonès even raised it due to the blocking of the investiture negotiations before reaching a definitive agreement with Together.

If this scenario occurs, it would be the first Govern in a minority since that of Artur Mas in 2015 when the UDC left, and the one that would have the least parliamentary support in the history of the Parlament, which would force Aragonès to seek the support of other formations, including the PSC and the comuns, to carry out their projects.