He wants to know if the Algerian authorities issued the document that is being investigated for alleged forgery. 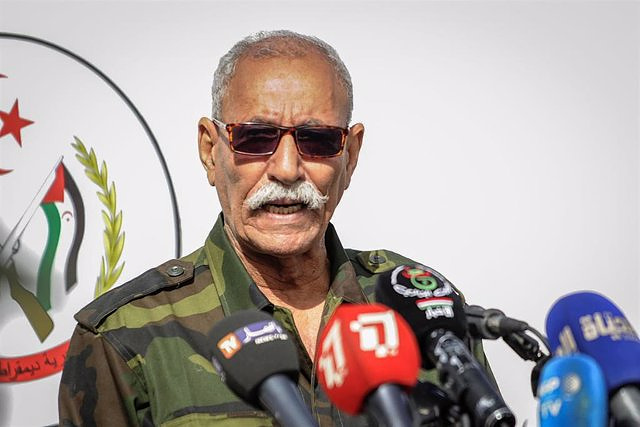 The head of the Court of Instruction Number 7 of Zaragoza has issued a rogatory commission to Algeria to ask its authorities about the passport that the leader of the Polisario Front, Brahim Ghali, presented --under another name-- at the San Pedro Hospital in Logroño , where he was admitted in April 2021 after landing on Spanish soil in a medicalized plane from the African country and without going through border or identification controls.

In a car, to which Europa Press has had access, Judge Rafael Lasala has agreed to carry out the diligence demanded by the Prosecutor's Office and go to the Maghreb country to find out if its authorities issued the passport that is being investigated in Zaragoza for alleged false documents. Specifically, to find out if the number that appears on the document corresponds to a file that has been processed and "if the identity of the person identified there is certain, Mohamed Benbatouche", born on September 19, 1950 .

In addition, the instructor has also asked about the passport that the State Attorney provided to the procedure so that Algeria indicates if it corresponds to a passport issued by its authorities and "if they know the identity" of Brahim Ghali Mustapha, born on 18 August 1949.

The investigating magistrate has recalled that Spain and Algeria signed a judicial assistance agreement in 2002 that establishes "the commitment" between both parties to grant each other mutual support. Thus, he has sent the Algerian authorities a photocopy of Ghali's passport to help clarify the facts under investigation.

The decision to release this rogatory commission takes place after this summer the judge agreed to extend the investigation for another six months and redirect it towards the crime of false documentation for the passport that Ghali used to identify himself at the health center.

The magistrate took this turn after the Provincial Court of Zaragoza ordered the file of the investigation that was being carried out against the former Minister of Foreign Affairs Arancha González Laya for alleged crimes of prevarication and cover-up as a result of the entry of the Saharawi politician to Spain without passing by border controls or documentation.

Thus, the judge will continue with the proceedings related to the crime of false documents. Last April, he asked the Polisario Front Delegation in Spain to provide the current address of Luali Brahim Sid El Mustafa, son of Brahim Ghali, to take his statement as a witness.

The Polisario Front limited itself to responding that "the aforementioned citizen is not part of the Saharawi Delegation in Spain" and that, therefore, they do not know where he resides.

Lasala agreed to release said document after a worker from the San Pedro de Logroño Hospital, during an interrogation in court, assured that Ghali's son could have been the person who provided the false passport to the health center.

Within the framework of that diligence, the instructor also issued a letter to the Ertzaintza Police Station in Vitoria to confirm whether the address that had already been provided by the Superior Police Headquarters of Aragon corresponded to the son of the Polisario leader.

The employee who registered the Saharawi politician in the hospital admissions service testified on April 11 as a witness and by videoconference before the judge. Legal sources then assured Europa Press that the worker, although initially she was unable to identify the individual who entered Ghali, finally provided a description that would coincide with the son of the Polisario leader.

‹ ›
Keywords:
LogroñoArgeliaFrente Polisario
Your comment has been forwarded to the administrator for approval.×
Warning! Will constitute a criminal offense, illegal, threatening, offensive, insulting and swearing, derogatory, defamatory, vulgar, pornographic, indecent, personality rights, damaging or similar nature in the nature of all kinds of financial content, legal, criminal and administrative responsibility for the content of the sender member / members are belong.
Related News