The INE raises GDP growth in 2021 to 5.5%, four tenths more, due to greater internal demand

But it extends the contraction of the Spanish economy in 2020 to 11. 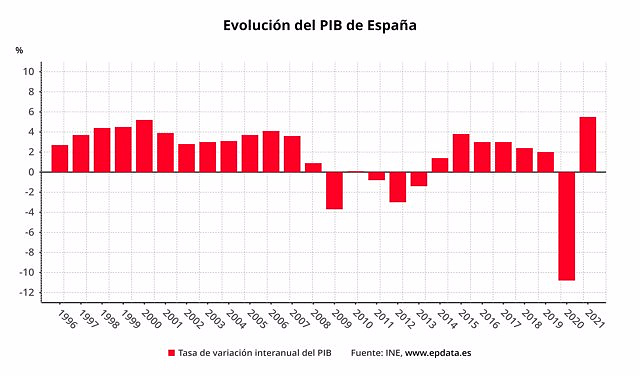 The National Institute of Statistics (INE) has revised upwards the growth of the Spanish economy in 2021, from 5.1% to 5.5%, due to the greater contribution of internal demand, derived in turn from an increase in household consumption higher than previously estimated.

Specifically, the rise in GDP growth for 2021 compared to the data advanced by the Quarterly National Accounts on March 31 responds to the fact that the contribution of domestic demand has been revised upwards by half a point, from 4.7% to 5.2%, compared to a lower contribution to the estimated external demand (from 0.5% to 0.3%).

Within national demand, the INE has raised the increase in year-on-year spending on final consumption from 4.2% to 5.1% and has revised down investment growth, from 6.8% to 5. 9%.

Household consumption has been revised upwards by 1.4 points, to show a growth of 6%, while public spending advanced less than estimated: it grew by 2.9%, compared to the 3.1% previously anticipated .

With regard to external demand, consistent with the revision of the balance of payments results, the INE has lowered the growth of exports from 14.7% to 14.4%, but maintains that of imports in the 13.9%.

GDP AT CURRENT PRICES RISES MORE, BUT DOES NOT REACH PRE-COVID LEVEL

At current prices, the interannual variation of the GDP was 7.9%, in contrast to the 7.4% anticipated at the end of March by the INE.

For its part, employment growth, measured in full-time equivalent jobs, remains at 6.6%, the same as in the March estimate.

All in all, the gross national income of Spain stood at 1,213,175 million euros in 2021, 0.2% higher than the previous estimate, according to the Annual National Accounts 2019-2021 published this Thursday by Statistics.

GDP SINKED 11.3%, MORE THAN EXPECTED, IN THE FIRST YEAR OF COVID

As a result of the update of the accounting series carried out by the INE, GDP growth in 2019 has been revised down one tenth, to 2%, while the contraction of the Spanish economy in 2020, the first year of pandemic, now stands at 11.3%, compared to the 10.8% drop previously estimated.

Statistics has explained that the revision of results for the year 2020 is mainly due to the availability and consequent incorporation for the first time in the national accounts of the results of the structural economic surveys that have been published throughout the second half of 2021 and the first half of 2022.

With regard to the downward revision of growth in 2019, the INE indicates that this is explained by "the supply-demand balance process inherent in the compilation of the tables of origin and destination for 2019 at current prices and at prices of previous year at a detailed level of 110 products".